The Acer Switch Alpha 12 is a 2-in-1 tablet with a high-resolution display, a detachable keyboard cover, an optional pressure-sensitive pen, and after having reviewed the tablet, I can say it offers the kind of performance you’d expect from a mid-range laptop… but in a 2 pound, fanless package.

Best of all, the Switch Alpha 12 is reasonably priced: you can buy one for about $600 and up.

The Switch Alpha 12 ships with Windows 10 software… but you may be wondering if it can run other operating systems. Yep. 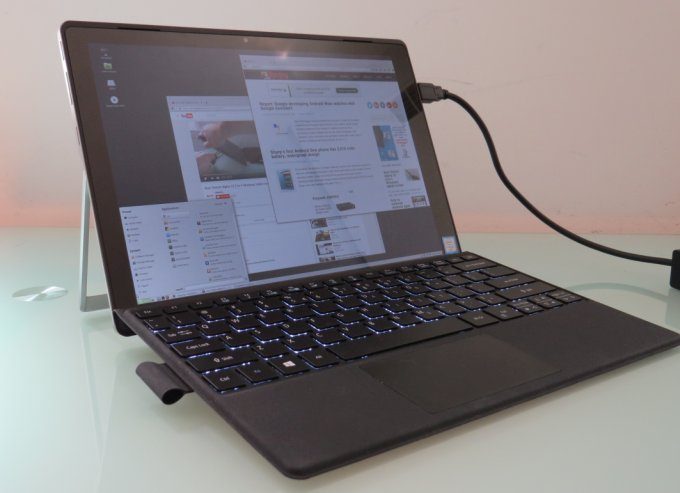 I decided to take the recently-released Linux Mint 18 Cinnamon for a spin, and almost everything worked out of the box. I couldn’t connect to any wireless networks using the internal WiFi adapter. But after plugging in an external WiFi dongle, I had no trouble getting online.

Since I didn’t want to install Linux Mint on the review tablet Acer sent me, I just booted the operating system from a USB flash drive.

Booting from a flash drive is very simple: just turn off the computer, plug in the flash drive, and then press the power button to turn the Switch Alpha back on. Press the F12 key on the keyboard when the Acer logo appears on screen (or just before that) and after a moment you should be greeted with a boot menu, allowing you to choose whether to boot Windows from internal storage or Linux from a flash drive.

You could also hit F2 if you want to go into the firmware settings to change the boot order permanently.

Since the Switch Alpha 12 has only one full-sized USB port (and since I don’t have a USB Type-C flash drive), I used a four-port USB hub to connect both the flash drive and WiFi dongle simultaneously.

Linux Mint boots quickly, recognized the keyboard and pen, supported keyboard shortcuts for adjusting the brightness and volume, and had no problems streaming videos from YouTube or playing audio through the tablet’s speakers.

While I’m using Linux Mint for this test, the ease with with I was able to run the operating system suggests that Ubuntu and other modern GNU/Linux distributions should be easy to load.

There is one thing to keep in mind: the 12 inch, 2160 x 1440 pixel display is super sharp and some operating systems handle high-DPI displays better than others. Using the default Linux Mint 18 Cinammon settings, everything on the screen looked really tiny. You can adjust the display resolution to make everything look bigger, or you may be able to tweak other settings depending on the operating system and/or desktop environment you’re using.

There is something else to consider before plunking down $600 or more on a Switch Alpha 12 for use with a Linux-based operating system: it gets mediocre battery life when running Windows. I didn’t extensively test battery life with Linux Mint, but since the system gets only about 4-6 hours of run time with Windows, I wouldn’t expect it to do much better with Linux.

42 replies on “Running Linux on the Acer Switch Alpha 12”