Don’t want to pay multiple times for the same app, eBook, or movie just so that you, your spouse, and your kids can all have it on your phones? Apple has a Family Sharing feature that lets you link multiple accounts and share content between users in your household.

Now Google is launching its own version, called Family Library. It lets you share eligible apps, games, movies, TV shows, and eBooks. You only have to pay once for each app. 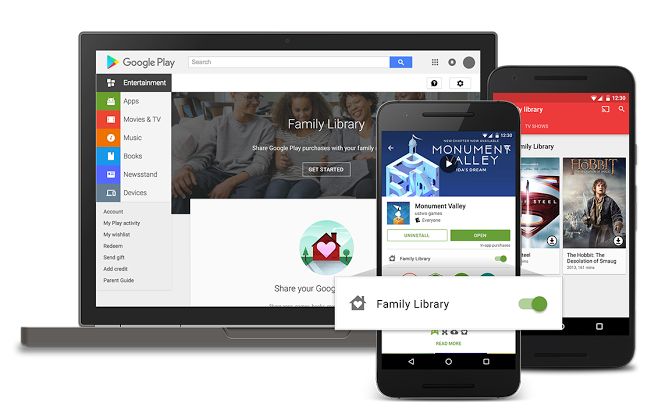 Google Play Family Library was unveiled in May, but despite reports that it was starting to roll out a few weeks ago, it wasn’t widely available until now.

Here’s how it works: you can create a Family Library with up to 6 family members. Then add any content you want to share to the library and all members of the group will be able to access it. Obviously Android apps and games will only be available to users with Android (or some Chrome OS) devices. But movies, TV shows, and eBooks in a Family Library can also be accessed on iOS or the web.

You may have noticed that there’s one type of content sold in the Google Play Store that’s not eligible to be shared with family members: music. While you can’t share purchased songs or albums, there is a separate Google Play Music family plan option which has been available since last year. For $14.99 per month, subscribers get unlimited music streaming for up to 6 family members. That’s $5 more than the $9.99 per month you’d pay for a single-user Google Play Music account.

Note that Google also says eligible apps, games, videos, and other content can be added to a Family Library, which suggests that not everything available for purchase from the Play Store will be available for sharing.