Audible is one of the biggest players in the audiobook space, and over the past year the company has been hiring a lot of radio and podcast professionals in an effort to expand into new territory.

Now Audible has taken the wraps off its new “short-form digital audio” service.

Audible Channels is basically a premium podcast network featuring ad-free programming and exclusive content that won’t be available anywhere else. 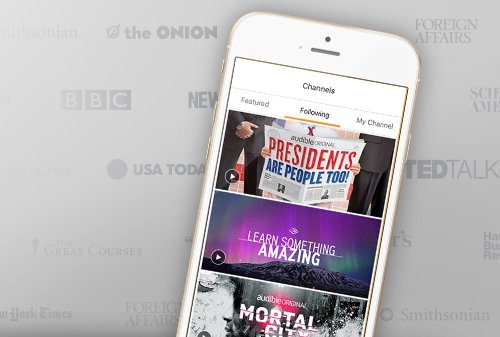 Subscribers can pay $5 per month to access every show available from Audible Channels. But if you pay $15 per month for an Audible membership (which includes one audiobook per month), Channels is a free add-on.

The first season of Serial is often touted as a breakthrough moment for podcasting, and in recent years we’ve seen the rise of podcast networks including Earwolf, Gimlet, and Panoply. But podcasting has been around for well over a decade. What’s relatively new(ish) is how much investment we’re starting to see in original programming from audio professionals.

Still, most podcasters make money the same way: through advertising. While networks like Gimlet claim they want to be the “HBO of podcasting” by offering high-quality products, Audible is taking a similar approach… and taking it a little more literally by charging a premium price for an ad-free experience.

New programs will roll out over time, and previews of some upcoming shows are already available. I’m particularly intrigued by a new show from Jon Ronson called “The Butterfly Effect.” While I’m reluctant to spend $5 per month for new podcasts when I already have a hard enough time keeping up on my favorite freely available programs, I’m totally tempted to pay to listen to Ronson’s show alone.

For the most part, Audible Channels seems like a great perk for folks who are already paying $15 per month for Audible, or considering signing up.