Say you’re a fan of Android, but all your friends and family use Facetime. You could carry around two phones… or you could buy a custom smartphone case that allows you to run both operating systems on a single phone. Kind of.

The MESUIT is an iPhone case that has the guts of an Android device. Connect it to an iPhone’s lightning port, run an app on the iPhone and you can interact with Android apps on your iPhone.

Produced by Chinese company Jijia, the MESUIT is available from the company’s website or from JD.com for a starting price of 999 yuan (about $150). 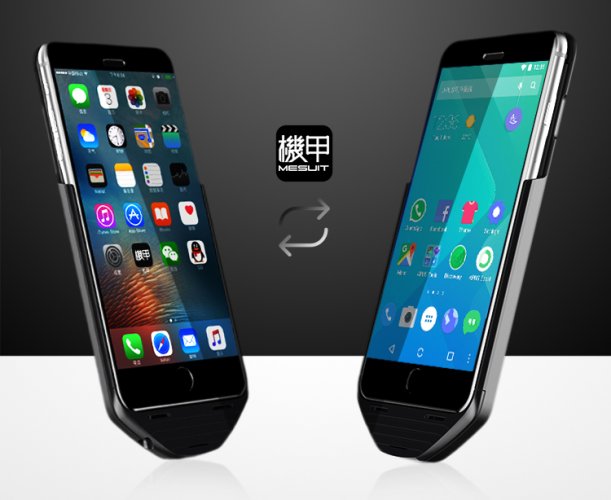 Both iOS and Android run at the same time since one is running on the phone and the other is powered by the case. And while the case has its own processor, storage, memory, and SIM card slot, the two operating systems share a display and touchscreen.

The MESUIT also has a built-in battery and storage, which can be shared with iOS.

The MESUIT comes in two sizes: there’s a version for the iPhones 6 and 6s which features a 1,700 mAh battery, and a larger iPhone 6 Plus and iPhone 6s Plus model with a 2,500 mAh battery.

Interestingly this isn’t the first case we’ve seen that lets you run Android apps on an iPhone. Recently Nick Lee from Tendigi showed off a DIY case that does much the same thing. But that model requires a lot of sweat equity and cold, hard cash.

I’m not sure how big a market there is for a product that lets you interact with two operating systems on a single phone. But $150 doesn’t seem like a ridiculous price for the convenience of not having to carry around two different phones.