But Sony has added support for additional devices including Amazon Fire TV products and Roku devices. You can also use an iOS device, and this week Sony rolled out an app that works with Android phones and tablets. 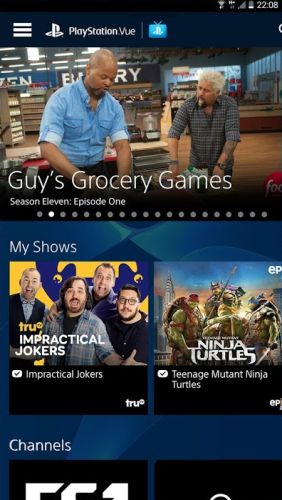 The new app works with Android 4.4 or later.

Subscriptions start at $30 in some markets and $40 in others, making PlayStation Vue a little more expensive than rival Sling TV, although each service offers a different channel lineup and different key features. One of PlayStation’s cooler features is a DVR function that lets you save some shows for up to 28 days.

Note that Sony recommends you only sign up for the service if you have home internet speeds of 10 mbps or higher… and some channels and shows may not be available at all if you try to stream them when you’re away from home (as determined by your IP).

Early review in the Google Play Store also indicate that the app doesn’t work on rooted devices, and that Chromecast/Google Cast functionality seems to be a bit wonky.

Overall, it sounds like PlayStation Vue for Android is a nice bonus feature for customers that are already using the service with a PlayStation, Roku, or Fire TV. But at this point, it seems like it’s a less than ideal solution for folks that only want to use an Android device.