The Pebble Core is a tiny, internet-connected device that you can use as a fitness tracker, music player, or smart remote control for your other gadgets.

It also has a microphone, which we were originally told was for recording voice notes on the go. But it turns out there’s another use for the mic: The Pebble Core supports Amazon’s Alexa voice service, which means you’ll be able to use your voice to ask questions, control your apps, and more.

Pebble plans to begin shipping the Core to backers of its Kickstarter campaign in January. The full retail price is expected to be $99, but backers of the campaign can snag one for a pledge of $79. 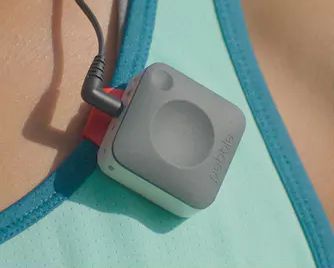 The Core is a small, screenless device with WiFi, GPS, and Bluetooth, a 3.5mm audio jack, and 4GB of built-in storage. It has a battery that offers up to 5 days of standard use, or up to 9 hours of music playback.

Pebble is positioning the Core as a device that lets runners track their routes via GPS or listen to music on the go. Since there’s built-in storage and 3G, you can either listen to local music or stream songs from Spotify (if you have a subscription).

Amazon Alexa integration means you can also stream music from Amazon Prime Music, iHeartRadio, or other supported services, get news updates, check weather forecasts, control smart home devices, or access just about any other service that integrates with Alexa.

Of course you can also use it to buy things from Amazon using just your voice.