Intel’s Apollo Lake processors will be the first chips to use the company’s new Goldmont CPU architecture. They’re expected to launch later this year, and they’ll replace the low-power Pentium and Celeron chips in the Braswell family which use Intel’s older Airmont CPU cores.

While we know that Intel is promising that Goldmont will offer up to 30 percent better performance than Airmont, we don’t have a lot of details about the new chips yet. But at least we know what names they’ll have… and in a few cases, we also have some information about the CPU frequency and TDP.

A recent Intel product change notification (PDF link) gives us the names of what are expected to be the first six Apollo Lake processors. 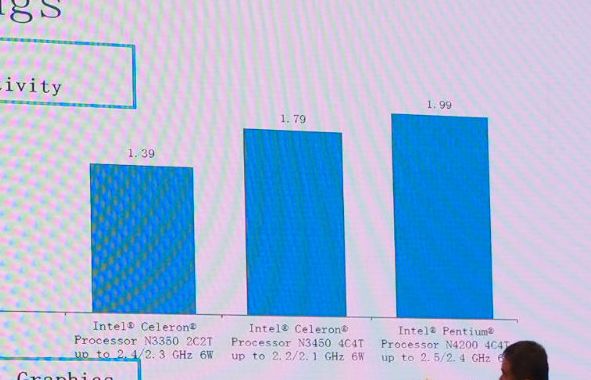 A slide from an Intel presentation at Computex provides some clock speed and wattage information about the N-series chips destined for laptops and tablets, I haven’t been able to find any details about the J-series desktop processors.

But here’s what we know so far:

Note that Intel typically positions N-series chips as laptop or tablet processors, while J series chips are aimed at desktops. Intel has already said that Apollo Lake chips will likely be used in 2-in-1 tablets.

In addition to a 30 percent performance boost for CPU and graphics functions, Apollo Lake chips are also expected to offer better efficiency (for longer battery life), support for USB Type-C connectors, and support for LPDDR4, LPDDR3, and DDR3L memory.