Motorola’s Moto G4 smartphone may have just gone on sale for $200 and up (or less, in some cases). But it looks like Motorola’s budget line of Moto E phones may also get an update soon.

Earlier this year specs for a phone that was expected to be marketed as a 3rd-gen Moto E showed up at the GFXBench website. Then the phone made its way to the Bluetooth SIG website.

Now a listing at the WiFi Alliance website confirms that the Motorola XT1706 really will be a Moto E phone. Specifically, it’s an Android 6.0 phone called the Moto E3 Power. 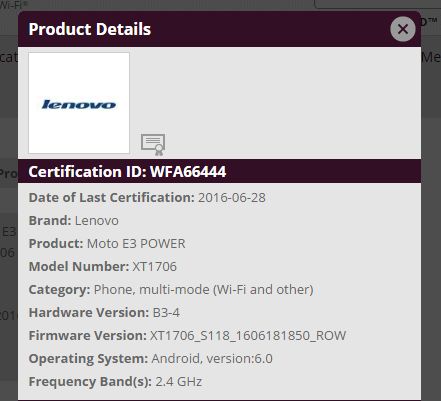 According to the WiFi and Bluetooth documents, the phone supports 802.11b/g/n WiFi, Bluetooth 4.0, and 4G LTE.

The GFXBench benchmark results suggest the phone will have a 5 inch, 1280 x 720 pixel display, up to 2GB of RAM, an 8MP rear camera, and 5MP front camera. It has a MediaTek MT6735P ARM Cortex-A53 quad-core processor and Mali-T720 graphics.

There’s no word on the price, release date, or what the word “Power” means in the phone’s name. But I wouldn’t be surprised if the Moto E3 Power had a big battery, fast charging support, or both.

Update: As Roland Qaundt notes, the phone is also being marketed in some regions as the Lenovo C2 K10A40. It’s already available in Ukraine that name, and it does indeed seem to have a large battery for a 5 inch phone. It’s equipped with a 3,500 mAh battery and features 16GB of storage and a microSD card slot.