These days there are smartphones with big screens and… less big screens. There are models with glass that wraps around the edges, and models that have modular components. But most smartphones look pretty much the same: a rectangle with a glass display.

Monohm’s Runcible breaks the mold. It’s designed to look more like a pocket watch than a smartphone… and in fact, you can’t even hold it to your head to make calls (you’ll need to pair a Bluetooth headset if you want to use the Runcible as a phone).

Monohm introduced the Runcible in early 2015, and now the company is raising funds for the project on Indiegogo in hopes of shipping the first units to backers in September. 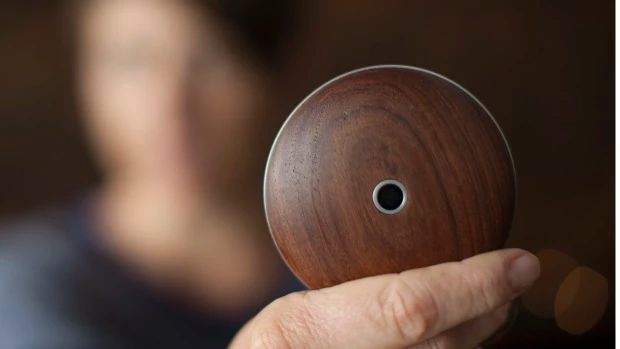 There’s been at least one major change since the project was first unveiled: it was originally expected to run an operating system based on Firefox OS. But Mozilla has been backing away from development of Firefox OS for mobile devices, so Monohm decided to develop an Android-based operating system called BuniOS.

Other features include a 7MP rear camera, a headset jack, and a USB port.

The device is also open source and hacker friendly, with easy access to the I2C, SPI, UART, and GPIO pins. Monohm says the Runcible is also designed to be easy to open up and repair, allowing you to keep the device for a long time, much as you would a pocket watch… assuming you’ll still want a mobile device with a Snapdragon 410 chip in 5 years.

Another a key selling point for the device is what it doesn’t do: the Runcible is a connected device that’s designed not to bug you with notifications or alerts, but which lets you view them at a glance when you feel like it.

Monohm says the company is also focusing on sustainability and transparency: the Runcible is designed and built in California, and the case is made from sustainably harvested wood.

All told, the Runcible is basically an artisanal phone or tablet-type thing… and it kind of has the price to match. In order to reserve one, you’ll need to make a pledge of $399 or more to the crowdfunding campaign.

Update: Actually, it looks like folks who had signed up for Monohm’s mailing list got a chance to save some money by reserving one of a limited number of Runcible devices for a pledge of $299. Add $15 for shipping, and that explains all the $314 orders.