Maru OS is a platform that lets you run both Google Android and Debian Linux on a smartphone. Use your device as a phone, and it’ll act like any other Android phone. Connect an external display, mouse, and keyboard and you’ve got a full-fledged Debian Linux desktop environment.

First unveiled in February, the project was in private beta for a while, which meant you needed to request an invite to download and install the custom firmware on a smartphone.

Now Maru OS version 0.2.3 is available to the public. As the name suggests, it’s still far from final software, but the lead developer of the project says it’s now stable enough for daily use… although for now only a single smartphone is supported — the Google Nexus 5. 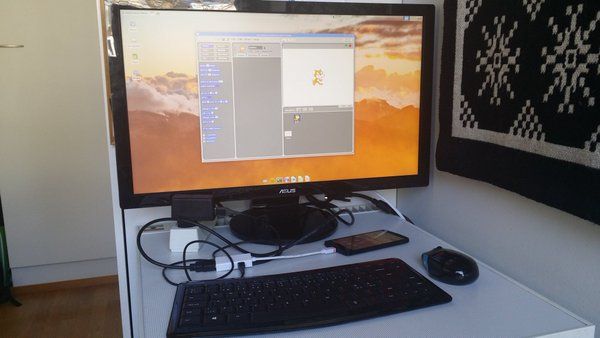 Work has also begun on making Maru OS an open source project, which could allow additional developers to contribute to the project or port it to run on other phones, although the current version of the Maru OS does require phones that support HDMI via MHL or SlimPort, which means not all phones will be able to run the software unless wireless display support is added in the future.

In addition to being the first public release, Maru OS 0.2.3 also supports mounting an entire sdcard in the desktop, includes Bluetooth improvements, and an updated desktop image.