The Huawei Matebook is a 2-in-1 tablet with a 12 inch, 2160 x 1440 pixel display, an Intel Core M Skylake processor, and a starting price of $699… although that price doesn’t include the optional keyboard cover and digital pen accessories Huawei will offer.

Huawei unveiled the tablet in February, and now the company is getting ready to launch it in North America. Huawei is holding a press event on June 20th, but I got a chance to spend a few minutes with the tablet a little early at an event in New York City.

Update: Huawei has announced that the tablet will be available starting July 11th. It’s already up for pre-order from the Microsoft Store. 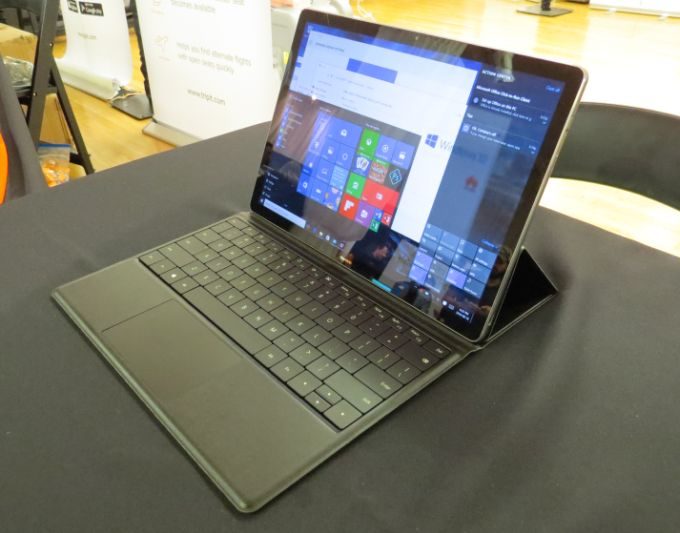 While I didn’t have time to give the tablet a thorough test (it didn’t even have an internet connection), it certainly has a very nice looking display which looks pretty good from all angles (although the lighting at this event made it hard to get a really good photo of the glossy screen that wasn’t shrouded in glare).

The Huawei Matebook has a fanless design, measures 0.27 inches thick and weighs 1.4 pounds. It’s light enough to hold comfortably in one hand, although the 12 inch screen is large enough to make me think I’d be most likely to put the Matebook on my lap when using it to surf the web, play games, or watch videos.

The optional magnetic keyboard cover is also pretty thin and doesn’t add much bulk to the tablet. You can fold the back of the cover into a triangle and use it as a stand for the tablet, allowing you to use the Matebook like a laptop… assuming your definition of a laptop is something that you use on a desk or table. It’d probably flop around a bit if you tried to place it on your lap.

The keyboard is spillproof and features full-sized keys that have just (barely) enough travel to make me think I could get used to typing on it after a while.

Huawei will also offer an optional Mate Pen with 2048 levels of pressure sensitivity for writing or drawing. The pen can also be used as a presentation clicker or laser pointer. Unfortunately I didn’t have a chance to see the pen.

The tablet has stereo speakers on the top, a USB Type-C port on the side (which is used for charging or for connecting peripherals), and a fingerprint scanner located between the volume buttons. There’s also a headset jack.

Prices are expected to range from $699 to $1599, depending on the configuration.