Google is making it a lot easier for Android users to find, install, and manage beta apps. The company has been allowing users to try beta versions of apps for a while, but in the past the process was pretty cumbersome.

Now all you have to do is open the Google Play Store, tap the Early Access button and find apps you want to help beta test. 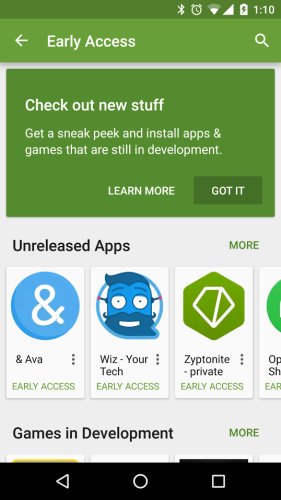 You can browser for “unreleased apps” or “games in development and install them just as easily as you would any other Android app. But you’ll see a warning message letting you know that “this app is in development. It may be unstable.”

You can find a list of all your beta apps by going to the Beta tab in the “My apps & games” section of the Play Store.

Once a beta app is installed, it should act like any other app on your phone or tablet… although it might be still be a bit buggy. But Google is only highlighting some of the beta apps and games that developers are working on, so for the most part if you download something from the Early Access section it should be pretty close to complete.

You can still sign up for beta tests the old-fashioned way by joining a Google+ group set up by the developer. But the new Early Access program makes it easy to find and try upcoming apps within the Play Store itself.