Samsung’s Galaxy S7 and S7 Edge went on sale back in March, but customers in the U.S. were still waiting for the company’s ruggedized remix. Now, the Galaxy S7 Active has launched — as an AT&T exclusive. 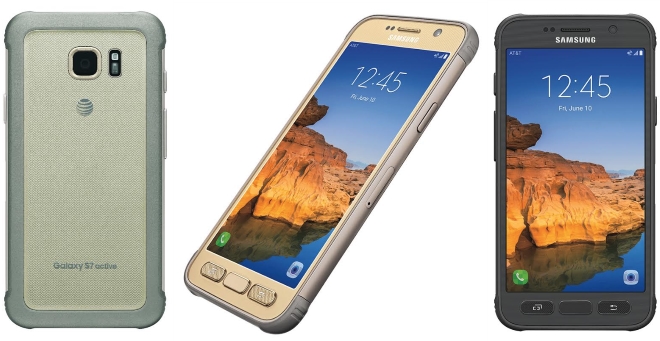 AT&T’s made a habit of that, of course, having brought the previous 3 Galaxy Active phones to its users. Like the S7 and S7 Edge, this year’s Active arrives with a number of refinements. Tops among them might be the massive 4000mAh battery it’s packing. That’s a full 1000mAh more than the S7 and 400mAh more than the Edge.

There’s plenty more to like about the S7 Active, of course. It’s powered by the same Snapdragon 820 chip as the North American S7, and it has the same 12-megapixel Dual Pixel camera and the same beautiful 5.1-inch, 1440 x 2560 pixel Super AMOLED display — wrapped in Gorilla Glass 4 that can withstand (certain) drops from up to five feet. It’s also IP68 rated against dust and water, which means it’s been tested under 1.5 meters of water for half and hour and survived.

Opting for a more rugged S7 also doesn’t mean you miss out on the return of expandability to Samsung’s flagship phones. The S7 Active does indeed have a micro SD slot so that you can increase your storage capacity. And like the S7, the S7 Active is available in multiple colors — though the palette is unique. You can choose from camo green, sandy gold, and titanium gray.You don’t have to worry about choosing a color just yet, though. AT&T’s “coming soon” page is live, but you won’t be able to purchase one until this Friday.