Mozilla released Firefox 47 this week, and some of the key new features include the ability to sync passwords, bookmarks, and tabs between desktop and mobile devices and improved video playback.

But in August, Mozilla will launch Firefox 48, which includes a much bigger change. It will be the first version of Firefox to feature a new multi-process feature called Electrolysis (E10s). It should offer security and speed improvements on some systems… but it could also cause some problems.

If you want to give Electrolysis a try, you don’t have to wait until August. Firefox 48 Beta should be available for download starting today. 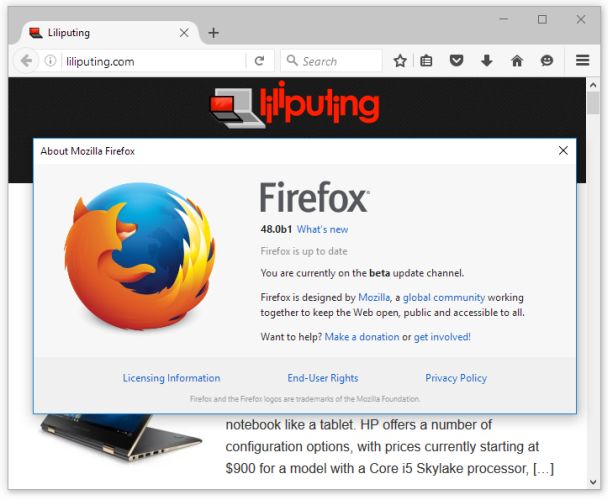 Here’s how Electrolysis works: the browser is run in a parent process, while web content is rendered in a background, child process. This provides an extra layer of security, since the web content is sandboxed from the browser itself. It should also keep a website that’s hogging system resources from making the entire browser unresponsive, and could improve performance on most modern computers.

Mozilla has been working on E10s for years, but there’s still some potential for problems during the rollout. For example, many Firefox add-ons don’t yet support the feature, so it’s possible that some extensions you consider must-haves may not work with the next version of the browser.

So Mozilla is taking things slow during the launch of Firefox 48 to detect any other potential issues before rolling out the feature to all users. When the browser is first released, only about one percent of users will have E10s enabled. Mozilla will analyze feedback from that initial set of users before deciding whether to roll it out to additional users in the following weeks.

Other web browsers, including Google Chrome, have long supported multiple processes, and even runs each runs a separate process for each tab. But Chrome is also a bit of a memory hog compared to Firefox.