Some smartphone shoppers are looking for phones with the best possible specs, a software experience that meets their needs, or an attractive price point. But there are at least some people interested in a phone that puts ethical considerations front and center.

The Fairphone 2 is easy to take apart and repair, in order to let you hold onto your phone for longer. A portion of the sales price goes to a worker welfare fund that helps the people who actually manufacture the device. And Fairphone builds the phones using materials from conflict-free sources wherever possible.

When I spoke with Fairphone’s Daria Koreniushkina for the LPX Show podcast in March, she told me that the Fairphone 2 wasn’t actually a 100-percent “fair phone” yet, because it wasn’t possible to solely use conflict-free materials. But now the company says that it’s taken a major step. 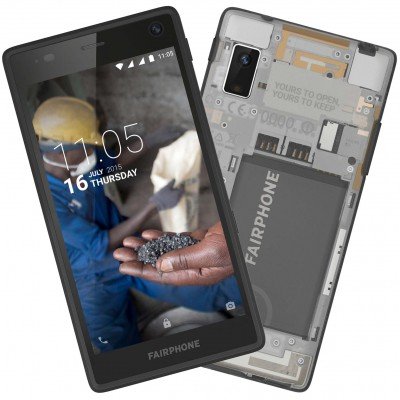 Tantalum, tin, tungsten, and gold are considered conflict minerals, because they’re often mined in regions where there are armed conflicts and abuse of workers. Proceeds from sales of these materials often funds further conflict.

One of the key goals of the Fairphone project was to produce phones that don’t fund those conflicts… and so the company has been working with international partners to mines that offer better conditions for workers and which do not provide money to groups engaging in armed conflicts.

Now Fairphone says it has made arrangements to procure tungsten from a mine in Rwanda that meets those conditions, and that starting in August, some of the tungsten used in the company’s phones will come from that phone. Fairphone already conflict-free tantalum, tin, and tungsten sources.

The company isn’t promising that all the materials used in its phone will be conflict-free, but at least some of the minerals are now coming from conflict-free sources… and about 50 percent of the tungsten used in production of new Fairphone 2 smartphones is coming from recycled sources.

Fairphone is a fairly small company in the grand scheme of things. It’s been a year since the Fairphone 2 was announced, and the company only celebrated the sale of its 100,000th phone a few weeks ago. But at least Fairphone is showing that it’s possible to take ethical considerations into account when making a complex consumer electronics device like a smartphone.