Amazon has updated its entry-level Kindle eReader with a new model featuring a thinner and lighter design, a few new features, and the same $80 price tag.

The new Kindle is up for pre-order from Amazon and expected to ship in early July. It’s available in black or white colors. 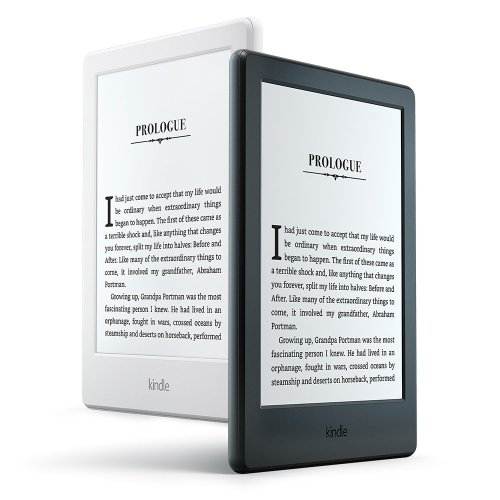 Amazon’s latest Kindle measures 6.3″ x 4.5″ x 0.36″ and weighs 5.7 ounces, making it 11 percent thinner and 16 percent lighter than the previous model. It also has 512MB of RAM, which is twice as much as last year’s model, although the 2016 Kindle has the same 4GB of storage. That should be enough space for thousands of eBooks.

This is also the first Kindle eReader to support Bluetooth audio… although the feature is really only designed for accessibility. You can pair a set of Bluetooth headphones or a Bluetooth speaker to use Amazon’s VoiceView screen reader, which reads everything aloud, including on-screen menus. This is the same software that works with more expensive Kindle models that support a Kindle Audio Adapter.

If you’re just looking for an Amazon device with text-to-speech software for reading eBooks aloud, you’re going to have to go with one of the company’s Android-based Fire tablets or a 2011-era Kindle Touch (or older model).

That’s about it for the updates to the entry-level Kindle. The new model doesn’t get a backlight or increased screen resolution, so if you want either of those features you should probably spend a little more money on a $120 Kindle Paperwhite (which is also now available in the US in white as well as black).