Before Siri was a virtual assistant built into the operating system that powers iPhone and iPads, the software was a standalone app developed by a team including Dag Kittlaus and Adam Cheyer. Apple bought the company and the rest is history… except that Kittlaus and Cheyer weren’t finished coming up with new ways for your device to act as a digital assistant.

Today the two introduced a new tool called Viv, which can do many of the things Siri can… and much more. 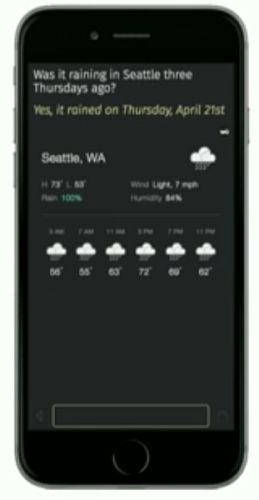 During a demonstration at TechCrunch Disrupt in New York, Viv was able to answer questions about the weather… but also to respond to requests like “Send my mom some flowers.”

Speech recognition is handled by software from Nuance, and weather information can come from services like Weather Undeground… but Viv also handles complex questions ranging from “what’s the weather like at home right now” to “will it be warmer than 70 degrees near the Golden Gate bridge after 5:00 PM the day after tomorrow?”

Or it can tap into your contact list and a payment service like Venmo for requests like “Send $20 to Adam” with as few steps as possible. Want to book travel plans? Ask it to “get me a nice room in Palm Springs for Labor Day Weekend” and information from Hotels.com can display various options, all of which you can interact with using the Vivi user interface. There’s no need to open a third-party app.

While Viv is open to more third-party services than Siri or Google’s voice search tools for Android, it’s not the only virtual assistant designed to tap into as many third-party applications as possible. Amazon is also actively trying to convince developers to tap into its Alexa voice service… and we’re even starting to see Alexa show up in new places. Not only can you use it on an Amazon products like a Fire TV or Echo and supported third-party devices like a Triby, but developers have even created apps that let you use it on a non-Amazon phones and tablets.

That said, at first glance, Viv does look like a pretty powerful alternatives to today’s virtual assistants in terms of its speed, accuracy, and ability to perform many different functions.

via TechCrunch, Forbes, and The Verge