Want to interact with your laptop, phone, or tablet? Then you probably need a keyboard, mouse, and/or touchscreen. But what about next-gen devices like smartwatches, VR headsets, and augmented reality systems like Microsoft’s HoloLens? It can be tough to use a traditional keyboard or touchscreen on devices that are tiny, or which obstruct your vision.

So the makers of Tap came up with a new idea: a device that you wear on your hand which lets you type or perform other actions just by moving your fingers. It’s kind of like using a keyboard… but without the keyboard.

Beta testing is expected to begin soon, and Tap should be available to the public later this year. 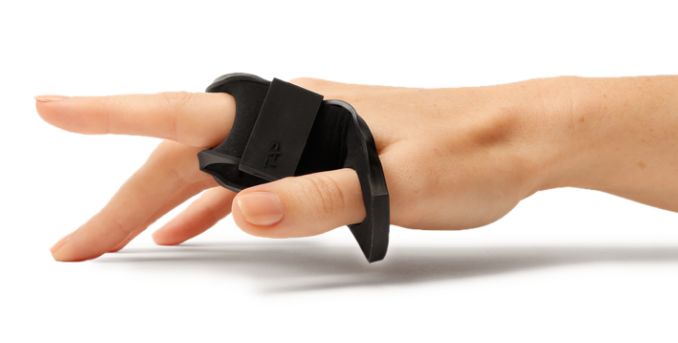 So what exactly is tap? It’s a flexible gadget that you place around five fingers. When you wiggle your fingers, Tap detects the motion and translates your movement into input for just about any device that can work with a Bluetooth keyboard.

You can tap out text for a smartphone, tablet, smartwatch, or other device using this system.

Tap has a built-in battery that’s good for up to 4 hours of use or 72 hours of standby time, and it can recognize 31 different tap gestures, allowing you to type with just one hand.

There’s a bit of a learning curve, but Tap says most people can learn to use the system in about an hour… which is a lot less time than it takes most people to become proficient typists on a QWERTY keyboard (although I suspect most of the people testing Tap are already pretty handy with standard keyboards).

While Tap might seem like the sort of project you’d find on a crowdfunding site, it has some big names behind it. One of the co-founders of the company is Ran Poliakine, who also founded Powermat Technologies, one of the first big players in the wireless charging space.