Strap an Oculus Rift, HTC Vive, or Samsung Gear VR to your face and you can peer into virtual worlds… but those worlds might look slightly claustrophobic. When we look at the real world, we have a roughly 180 degree field of view, while most virtual reality systems have fields of view closer to 110 degrees.

But Microsoft Research has a solution: sparse peripheral displays. Basically, the company has demonstrated a system for placing dozens of LEDs around the edges of the primary display to make virtual reality a little more immersive. 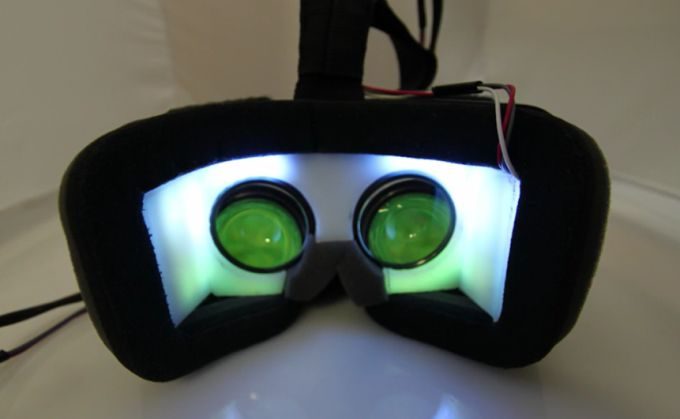 Here’s the idea: sure, you have a 180 degree field of view in real life. But things get pretty blurry around your peripheral vision. So Microsoft’s researchers figure you don’t really need a high-resolution display to trick you into thinking you have peripheral vision in a virtual environment.

The company created a prototype called SparseLightVR which places 70 LED lights on the sides of an Oculus Rift headset. They can change color to match scenes in video games. When you move your head to look at different visuals, the colors change as well.

In addition to making you feel a little more like you’re immersed in a virtual world, Microsoft says this can help reduce the motion sickness that’s sometimes associated with virtual reality.

There’s no word on if or when we’ll see this technology implemented in actual VR or AR products. Microsoft’s HoloLens system doesn’t seem to be a likely target for this technology, since the goal of HoloLens is to overlay virtual objects on the real world without obstructing your view of the physical world. Putting a bunch of LEDs on the side of the display would sort of defeat the purpose.