Microsoft has released tools that allow developers of desktop Windows programs to convert their software into Universal Windows Platform apps that can be distributed through the Windows Store. And it looks like the company is practicing what it preaches, because a handful of Microsoft utilities have started showing up in the Windows Store.

What kind of utilities? WordPad, Character Map, Paint, and Windows Fax and Scan. Exciting, I know. 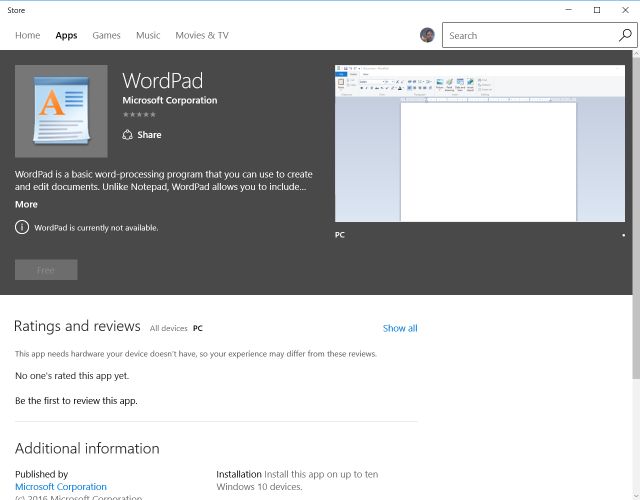 Still, these apps, discovered by @h0x0d (Walking Cat) are some of the first available for download from the Windows Store that seem to have been converted using Microsoft’s Project Centennial tools.

Microsoft also offers tools to help developers port iOS apps and web apps to the Universal Windows Platform, making them available for Windows 10 PCs, phones, Xbox game consoles, and other devices. The company had initially planned to offer a similar “bridge” for Android app developers, but that project seems to be canceled, or at least indefinitely postponed.

Now that Intel is planning to phase out its entry-level chips for phones and tablets, Microsoft’s push to get developers to move to its Universal platform could be more important than ever. One of the key differences between a Universal app and an old-fashioned Win32 app is that Universal apps can run on devices with ARM-based processors as well as those with Intel or AMD chips.

While WordPad and the Windows fax & scan utility might not be the most sought-after Win32 apps (especially since they come pre-installed on Windows PCs), their inclusion in the Windows Store shows that Microsoft is continuing to test its tools for porting classic Windows apps. This move could also pave the way for Microsoft to offer updates for some of its core apps without pushing operating system updates to the user… much the way Google can release updates to its Android keyboard, maps, web browser, and many other apps through the Google Play Store without requiring OS updates.