Microsoft has released a new preview build of Windows 10 to members of the Windows Insider program, and it includes several updates affecting the Microsoft Edge web browser, improved support for Ubuntu on Windows, and a few other tweaks.

But one of the most notable changes is something that’s not in Windows 10 Insider Preview Build 14342: a feature that allows you to automatically connect to Wi-Fi networks shared by their contacts without entering a password. 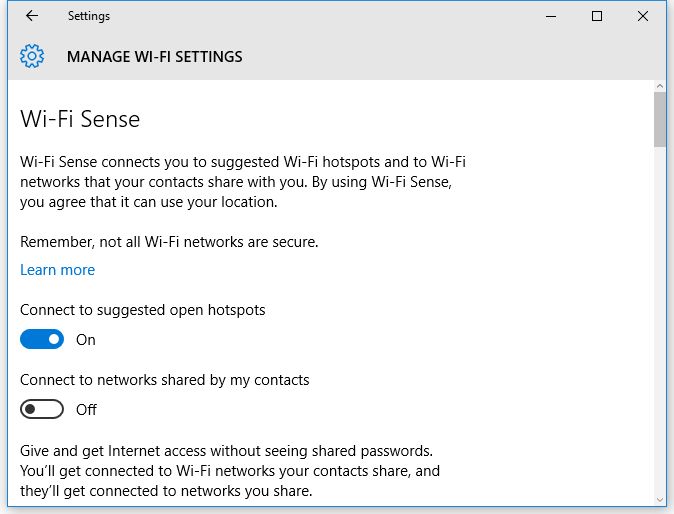 Windows 10 includes something called Wi-Fi Sense, which is a system designed to let you quickly connect to some wireless networks. One way it does that is by letting you connect to networks shared by your contacts.

The idea is, for instance, a friend could visit your house and connect their laptop to your password-protected network without asking you for login details.

Some folks have criticized the feature for its privacy implications.

Microsoft isn’t killing Wi-Fi Sense altogether. It’s still in the latest Windows 10 preview build… but it will no longer share networks with your contacts. Instead, it’ll allow you to connect to open Wi-Fi hotspots through a crowdsourced list of available networks.

Microsoft says it chose to kill the network sharing portion of Wi-Fi Sense because “the cost of updating the code to keep this feature working combined with low usage and low demand made this not worth further investment.”

In other words, the first users to lose the feature will be those that install Windows 10 Preview Build 14342, but eventually Microsoft will probably roll out the change to all users through a Windows Update.

Other changes in Build 1432 include a chance in the way Microsoft Edge browser extensions are loaded. Instead of downloading and installing Extensions from local storage, they’ll now be installed and updated directly from the Windows Store.

The Windows User Account Controls dialog can now work in dark mode. And there’s a new icon for the Windows Ink workspace.

You can find a longer list of changes in Build 14342 at the Windows Blog.