Microsoft may be working on a holographic computing platform that involves a big, expensive headset. But researchers at Queen’s University’s Human Media Lab have developed a headset-free system that works with a smartphone-sized device.

It’s called HoloFlex, and it’s a flexible touchscreen display combined with an array of more than 16,000 fisheye lenses that give graphics a 3D effect, making it look like they pop off the screen. 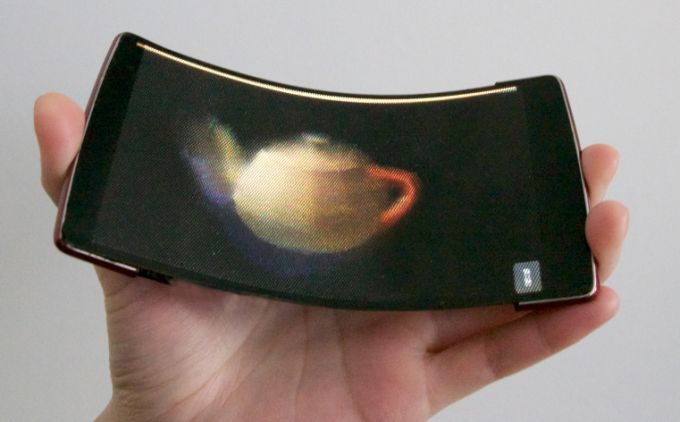 As the team’s demo video makes clear though, there are some serious downsides to the technology.

The biggest problem is resolution: the HoloFlex uses a 1920 x 1080 pixel display, but images are rendered in circular blocks that are 12 pixels wide to give them a 3D effect… and that means you have an effects screen resolution of just 160 x 104. Imagery looks pretty grainy.

The upside is that you don’t need to wear special glasses to see the 3D effects. And since the system uses a flexible OLED display and a bend sensor, you can interact with content either by touching the screen or by bending it.

Researchers build a prototype using a Qualcomm Snapdragon 810 processor, 2GB of RAM, and Android 5.1 software. But theoretically this technology could be used with more powerful hardware (and higher-resolution screens) to open the door to more powerful holographic gaming, video conferencing, and other applications.