One of the most exciting new features coming to Android this summer is the addition of support for multi-window views, allowing you to interact with two apps at the same time. Sure, some Android phone makers have offered their own multi-window software for years, but soon it’ll be baked right into the operating system,

There were early versions of multi-window mode included in the first and second developer preview versions of Android N. But now that preview 3 is available, the folks at Android Police noticed something new: support for viewing multiple Google Chrome browser windows side-by-side. 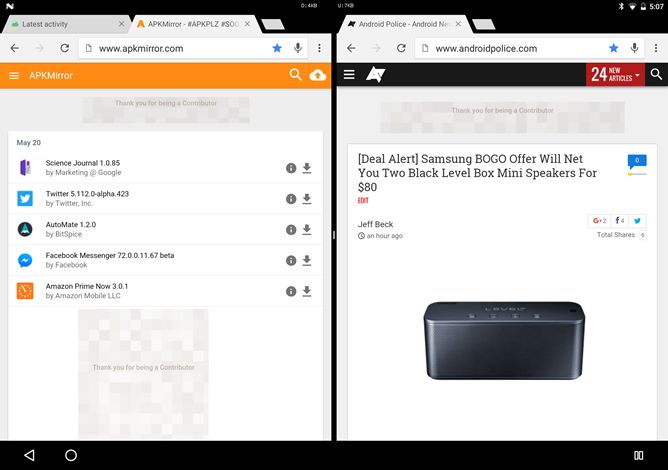 Previously, the Android N multi-window feature allowed you to open two apps and view them at the same time. But if you wanted to look at two different websites at once, you needed to open two different browsers (such as Chrome and Firefox or Opera), because you couldn’t view different instances of the same app in side-by-side windows.

That means you don’t need to minimize a browser tab to look at a different web page, and you don’t need to run two different browsers at once. Want to compare two similar phones to see which one has better specs? Just pull up the spec sheets for each phone in a separate window and glance from side to side. Want to read the news in one window while watching a video or writing a blog post in the other? You can do that too.

According to Android Police, the new feature works thanks to a new “Move to other window” option in the settings menu of the Chrome app for Android.

You can move one browser tab at a time, and once you’ve got multiple windows, you can open new tabs in each window.

Windows can be resized by dragging the slider that separates them.

Now if Chrome for Android would just add support for browser extensions, I’d be slightly less excited about the fact that Android apps are coming to Chrome OS and more excited about using Chrome on my Android devices. Currently I use Chrome on my desktop, but Firefox on my phone because I find it easier to use the mobile version of password manager Lastpass with Firefox than Chrome.