Sharp’s RoboHon isn’t your typical smartphone. Yeah, you can use it to make phone calls or run Android apps. But it looks like a small robot, walks like a robot, and even dances like a robot. For some reason it also has a built-in projector.

Sharp introduced RoboHon in October, and now the company is getting ready to sell the robot/phone to Japanese customers.

It’s available for pre-order in Japan, and the little guy is expected to hit stores on May 26th. Priced at 198,800 yen (about $1,816), the Sharp RoboHon is one of the most expensive smartphones on the market… but also one of the most unusual. 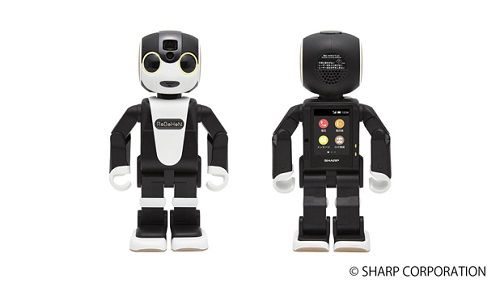 But it also has 13 servo motors, a series of motion sensors, a a projector that can display imagery at 1280 x 720 resolutions, and you know, two arms, two legs, and a head.

It can be operated with voice commands. So while the built-in display is tiny, the idea is that you wouldn’t actually use it all that much. Instead, you can speak to the robot to answer calls, ask it to display photos with its projector, and more… although Engadget notes that you’ll have to pay a monthly fee if you want to use cloud voice recognition features powered by Nuance.

Clearly this 7.7 inch, 14 ounce robo-phone is a niche product that kind of screams Japan. But even so, the $1,800 price tag seems a bit steep.