Amazon’s Kindle eReaders used to include support for text-to-speech, allowing you to plug in a pair of headphones or use a built-in speaker to listen to a computer voice read books out loud to you. But Amazon hasn’t released a Kindle with those features since 2011.

Now it looks like text-to-speech may be making a comeback. While Amazon hasn’t confirmed support for Bluetooth audio in the new Kindle Oasis eReader, FCC documents show that the device has a wireless chip that support Bluetooth.

And it turns out there’s software hidden on the eReader which might be able to let you listen to audiobooks in the future. 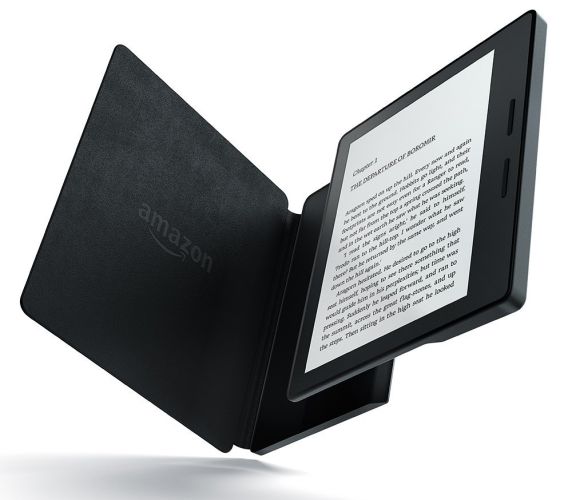 Using text-to-speech to listen to books is an imperfect alternative to listening to professionally-narrated audiobook. The pacing can be rough, the voices can sound a bit mechanical, and software can have a difficult time pronouncing uncommon names or places.

But the feature can come in handy if there’s no audiobook version of a title you already have in eBook form, or if you just don’t want to pay extra for a book you already own.

Amazon’s last Kindle eReader to support text-to-speech was the 2011 Kindle Touch. When the company introduced the first Kindle Paperwhite in 2012, along with new entry-level Kindles, the company stopped including the feature… although you can still use text-to-speech on Amazon Fire tablets.

German site Self Publisher Bibel notes that the new Kindle Oasis eReader, though, has a folder on its built-in storage called Voice. In that folder is an English text-to-speech voice called Salli, which is the same one Amazon uses for its tablets.

So it’s possible that Amazon could enable text-to-speech in a future software update. The company hasn’t officially commented on the matter though, so there’s a chance it won’t happen.

Unfortunately it’s unlikely to show up as a software update for the Kindle, Voyage, or Paperwhite models anytime soon, since those devices lack any sort of audio hardware.

One of the reasons I was initially reluctant to switch to a new model that lacked audio hardware. But over the past few years I’ve grown accustomed to borrowing audiobooks from my local library on CD or through OverDrive and listening with my phone… and once you’ve heard professionally-voiced audiobooks it’s kind of hard to go back to text-to-speech unless you have no other options.