Intel’s RealSense 3D camera technology allows smartphone and tablet users to snap photos and adjust the depth-of field after the fact. Another version of RealSense allows you to interact with a laptop or desktop computer using 3D gestures — by waving your hands in front of the device without touching it.

Now Intel wants developers to do something else with its RealSense cameras: build robots, drones, and other semi-autonomous devices.

The company unveiled a new Robotic Development Kit and Aero Kit (for drones) during the Intel Developer Forum in Shenzhen this week, and the Robot kit is already available for pre-order for $250 . 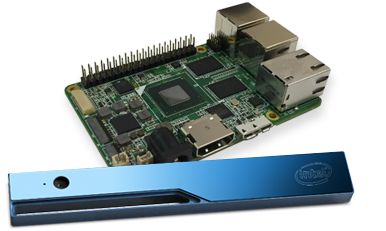 The kit also comes with a tiny computer-on-a-module called the UP Board (sold separately for $89 and up) that looks a bit like a Raspberry Pi, but which has an Intel Atom Cherry Trail processor instead of an ARM-based chip.

Intel expects to begin shipping the kit in June. Don’t need the RealSense camera? You can pre-order a 4GB/32GB UP Board for $129.

PC World reports that the upcoming Aero kit will have an Atom x7-Z8700 processor and run embedded Linux software. It’s expected to be available in the second half of 2016.