The Kangaroo PC is a tiny, low-power desktop computer that’s about the size of a smartphone. Slide it into your pocket or purse and you can easily ferry it from home to work and back again… and since there’s a built-in battery good for up to 4 hours of run time, you might not even need to shut it off while you’re traveling.

InFocus launched the original Kangaroo in 2015 and you can buy it for about $100. More recently the company introduced a $170 model with twice the memory and storage, but no operating system.

Now InFocus is updating the lineup with the Kangaroo Mobile Desktop Pro. The computer itself is virtually identical to the original $100 model. But the Kangaroo Pro comes with a new Pro Dock that offers more options for connecting storage, displays, and networks.

I’ll leave it up to you to decide if those features warrant the price: at $200, the Kangaroo Pro costs twice as much as the original Kangaroo PC. The new model (and the original) are both available from Newegg. 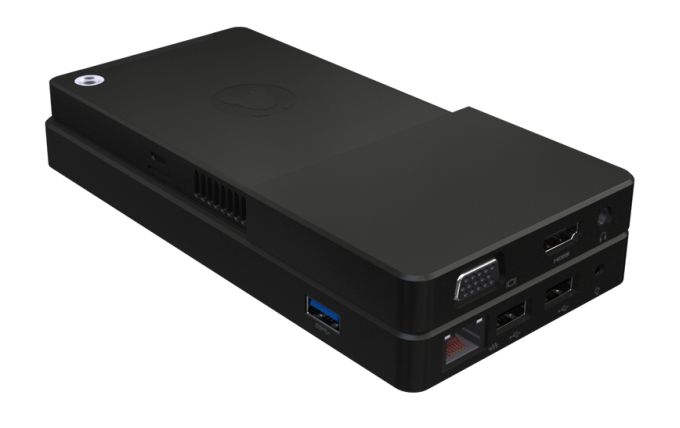 It runs Windows 10 Home software, features a microSD card reader, 802.11ac WiFi, and Bluetooth 4.0. And there’s a fingerprint scanner on the side of the case, allowing you to login to the tiny PC without typing a password. It should also support upcoming Windows Hello features, including the ability to login to websites using the Microsoft Edge web browser and a fingerprint scan.

What’s new is that the original Kangaroo PC came with a small dock that featured an HDMI port, a USB 3.0 port, a USB 2.0 port, and a power jack. The Kangaroo Pro has a larger dock that doesn’t just sit at one end of the computer, but also wraps around the bottom, more than doubling the size of the PC, but also adding a bunch of features. 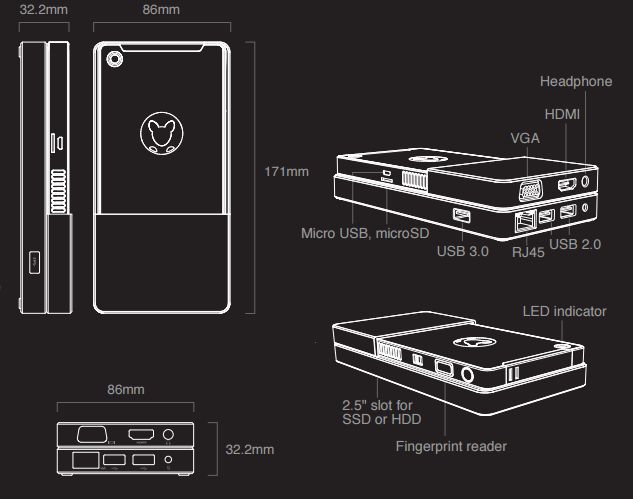 The Pro Dock has VGA and HDMI ports, an audio port, an Ethernet port, and three USB ports (one USB 3.0 and two USB 2.0). It also has room for a 2.5 inch drive bay for a hard drive or SSD.

InFocus showed off several different Kangaroo docking solution prototypes at the Consumer Electronics Show in January, suggesting that the company could eventually launch a variety of different docks. The Pro Dock may just be one of the first.

The Pro Dock is available exclusively as a bundle with the Kangaroo Mobile Desktop Pro for now. InFocus says there are currently no plans to sell it as a separate accessory for customers that may have already purchased another Kangaroo PC model. But it is compatible with the original Kangaroo PC and Kangaroo Plus, so there’s a chance the company could decide to sell the dock on its own in the future.

There’s also an app that lets you use an iPad as an external display for the little computer: just install the OSLinx app on your iPad and you can sort of use the Kangaroo as a mobile device without carrying around a monitor.

OSLinx has been available for a while, but in addition to launching the new Kangaroo Pro, InFocus has updated the app to work with iPhones, allowing you to view your Windows 10 desktop on an iPhone 4S or later.

Oddly the iPad app is a free download, while the iPhone version will set you back $4.99.