Google recently launched the second developer preview of Android N with support for the Vulcan graphics API, Unicode 9 emoji (with options for emoji that look like people rather than little yellow blobs), and launcher shortcuts.

But there are also a number of thing in Android N Developer Preview 2 that Google didn’t officially call attention to. It’s not clear if all of those unannounced features will be available when the next version of Android launches to the public, but they do seem to give us a peek at some of the things Google is currently working on.

A handful of device makers have started shipping smartphones with pressure-sensitive screens that can detect not only when you tap a screen and for how long, but also how hard you press.

Apple included support for a feature it calls 3D Touch in recent versions of iOS, but phone makers like Huawei that ship Android phones with screens that can measure degrees of force have had to build their own software solutions.

Now Phandroid reports that it looks like Google is building support for force touch directly into the operating system. It’s still in its early stages, but Phandroid partnered with the developer of Nova Launcher to create a custom version of the home screen app that could recognize pressure… allowing you to view different options when you long-press or force-press an icon.

In this example, tapping a weather icon launches the app, while pressing harder on the same icon would bring up a pop-up that shows a 5-day forecast. Since Phandroid didn’t have a phone with a force touch screen to test, the launcher and app actually rely on a swipe rather than a force press, but it shows how the feature could eventually work.

Ron Amadeo from Ars Technica noticed a new settings menu for “VR helper services,” and did a little digging in the Android code to find more details. 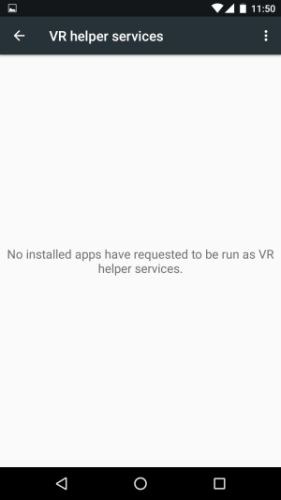 It looks like Google is developing an API that lets certain apps perform special functions when you’re using your phone in “virtual reality mode,” likely by placing into a Google Cardboard or Samsung Gear VR-style headset.

There’s also mention of a “sustained performance” mode, which could be designed to let games, video players, or other apps run for an extended period without throttling back CPU speeds to reduce performance (and extend battery life) under certain conditions. This could be designed to help those apps run better when you’re using VR mode… although it’s likely that this feature could take a toll on battery life.