As expected, Amazon’s next high-end Kindle eReader is called the Kindle Oasis. And as expected, it features a brand new design with a set of page-turn buttons on one side, a sensor that automatically rotates the display when you flip the device over to hold in your other hand, and a removable cover with a built-in rechargeable battery.

What’s a little unexpected is the price. At $290, the Kindle Oasis is the most expensive eReader Amazon has launched in years. But if you don’t need all the bells and whistles, Amazon continues to offer more affordable Kindles for as little as $80. 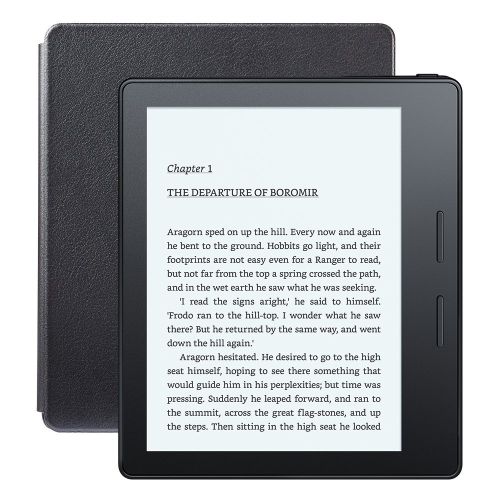 The Kindle Oasis weighs less than 5 ounces (without the cover)and measures 3.4mm at its thinnest point and 8.5mm at its thickest. The battery seems to be packed into one side of the Kindle, behind the page turn buttons, allowing the other side of the eReader to be very thin.

The eReader has a 6 inch E Ink display with 300 pixels per inch and 10 LED lights to provide more even illumination of the screen. (The Kindle Voyage has 6 LEDs, and the Paperwhite has 4).

When used on its own, Amazon says you should get a few weeks of battery life between charges (assuming you read about 30 minutes per day). But the Oasis also comes with a leather flip cover that attaches to the eReader magnetically, and which has an extra battery. Amazon says the Kindle Oasis with the battery cover can get months of battery life.

The cover comes in black, red, or brown color options and when the cover is attached, you can charge both the Kindle Oasis and the cover at the same time. When unplugged, the cover can charge the Kindle. That means that even if you use the Oasis without the cover, you can get up to two weeks of battery life, then attach the cover and set the eReader aside to top off its battery so you can use it for another few weeks.

There’s no option to buy the Oasis without the cover, which could help explain why this eReader is $90 more expensive than Amazon’s last-gen premium model: the Kindle Voyage.

The Kindle Oasis is now available for pre-order from Amazon for $290. It should ship starting April 27th. There’s also a model with 3G wireless capabilities that sells for $360.

While this is certainly Amazon’s most expensive Kindle available at the moment, the company has charged higher prices for other models. The 1st-gen Kindle sold for $399 when it launched in 2007. And the discontinued 9.7 inch Kindle DX sold for $489 when it first hit the streets in 2009.