Microsoft is betting big that the way humans will interact with machines in the future is using natural language. That’s why the company launched the ill-fated Tay Twitter bot last week. It wast just one of a number of chat bots the company is working on to bring machine learning to play, allowing its software to get better at responding to natural language questions with natural language responses.

CEO Satya Nadella laid out a vision for the future where “bots are the new apps” during the Microsoft BUILD keynote today, and Microsoft executives showed off new features coming to its Cortana digital assistant software and new tools that will let developers build bots that can interact with Cortana and Microsoft’s Skype messaging tool.

Not only will this let you speak to your phone, PC, HoloLens, or other device the way you would talk to a person… bots and apps can also talk to one another.

For instance, developers can create chat bots for a business… then Cortana can talk to those bots on your behalf. Want to book a hotel room? Tell Cortana your travel plans and it can start a conversation with a virtual booking agent for a hotel.

The new Microsoft Bot Framework will let developers build chat bots that can be used not only on those platforms, but also Outlook, Slack, or other platforms.

The bot framework and Skype bot tools are available for developers starting today.

Another feature coming to Skype which is related to natural language processing, but not bots per se, is support for video voicemail with written transcripts. Microsoft says this feature is coming soon to Skype. 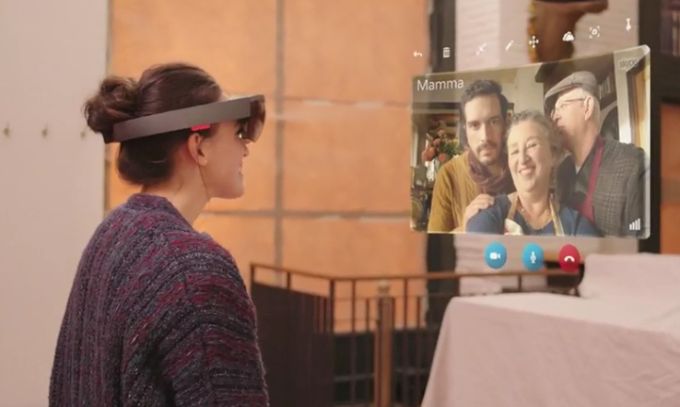 Microsoft also showed off a demo of a new version of Skype coming to HoloLens, which will let users project video calls on a virtual display in front of them, and show people on the other end of the call what they’re looking at.