Intel’s NUC line of computers are compact desktop PCs which typically have laptop-class processors. Now Intel is getting ready to launch its most powerful model to date. 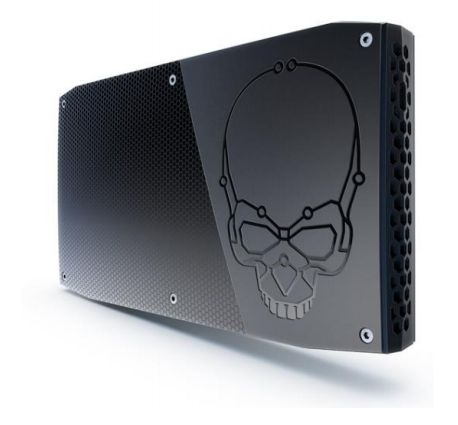 The computer measures about 8.5″ x 4.6″ x 0.9″ which makes it about as wide and tall as a typical Intel NUC computer, but about twice as long. The extra space is pu to good use though.

In addition to the powerful processor, the system supports up to 32GB of 2133 MHz memory, has two M.2 slots for solid state storage, features 802.11ac WiFi and Bluetooth, Gigabit Ethernet, a headset jack, and a range of ports, including:

The computer also comes with two lids. One is matte black, and the other has a skull logo on it.

Not satisfied with Intel Iris Pro graphics? Intel says you can also plug in external graphics docks like the new Razer Core, thanks to the the Skull Canyon NUC’s Thunderbolt 3 port.

A barebones model with the processor and wireless cards, but no memory, storage, or operating system will set you back $650. Intel figures a version with 16GB of RAM, 256GB of storage, and Windows 10 will likely sell for about $999.

The Skull Canyon NUC should go up for pre-order at Newegg in April, and Intel plans to begin shipping the computer in May.