Google’s search apps have been able to listen to your voice and respond with speech for years. Want to get directions to your next appointment? Google Maps can read them to you out loud. Wondering what the capital of New Zealand is? Ask Google Search and the app will tell you it’s Wellington.

But while the voice of Google’s search apps is pretty easy to understand, it still has a bit of a robotic tone at times.

Last week some users noticed that Google Search was starting to sound a bit more human, though. And it turns out there’s a good reason for that: Google has been working to build a better voice for its search app.

Googlers Nat and Lo have been producing short documentaries of some of the things happening behind the scenes at Google, and their latest video takes a look (and listen) at Google’s new Voice.

In a nutshell, Google held a new recording session with the voice talent behind Google’s voice search which involved recording thousands of sentences. Some of those sentences are played back in their entirety when you ask the Google app to do something common, like send a text message. But the goal is to record enough content so that different sounds can be stitched together in new ways as needed.

That way Google can form words that were never actually recorded. 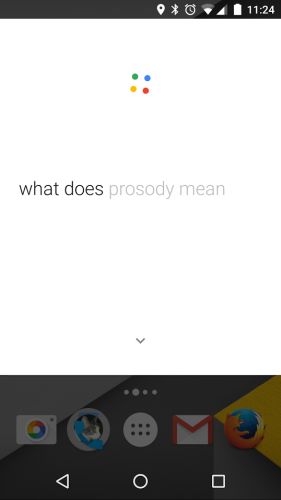 One of the key differences between the new voice and the older one is that Google paid extra attention to prosody and intonation, which basically means that the new voice does a better job of shifting pitch, tone, and other melodic elements of speech to sound more person-like when asking or answering questions or making different types of statements.