Few OEMs have embraced Chromebooks the way CTL has. They released several models last year, and they’ve just added a new convertible model to their line-up. 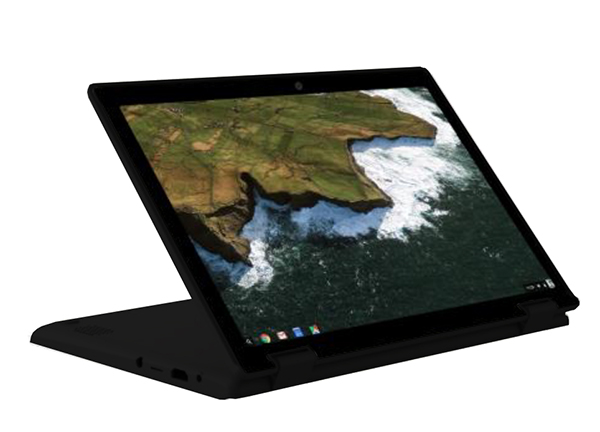 Their latest Chrome OS portable is the J5. It features a 360 degree hinge like Lenovo’s Yoga laptops (and numerous others) that allow it to be used as a laptop or tablet, or folded into “tent” configuration. Its flexibility isn’t the only thing the J5 has going for it, though.

Like a few of CTL’s other Chromebooks, the J5 has also been ruggedized — it’s got a splashproof keyboard and a chassis that’s built to withstand moderate drops. That has a lot to do with CTL targeting the J5 at the educational market, where $250 computers often wind up in the hands of student users that are less-than-delicate when handling things like laptops and tablets.

The 11.6-inch IPS panel supports 5-point touch input, and there’s an optional stylus should students want to sketch or use handwritten input instead of typing or tapping.

The J5 packs a decent amount of power for a Chromebook, thanks to a Braswell N3050 processor and 4GB of RAM. Internal storage is limited to just 16GB but can be expanded via a micro SD card slot. CTL has also equipped the J5 with a pair of USB 3.0 ports, and HDMI output, and an HD webcam. It shouldn’t have any trouble making it through an entire school day, thanks to a battery that CTL says can provide around 10 hours of use between charges… unless, of course, sneaky students figure out how to get around their schools’ firewalls and start streaming video or playing games.