Another day, another Chrome OS laptop from Acer.

The company hasn’t actually announced that it’s working on a 14 inch model with an Intel Celeron N3050 processor yet, but the folks at Notebook Italia spotted an FCC listing and some online store websites suggesting that a new Acer Chromebook 14 is on the way. 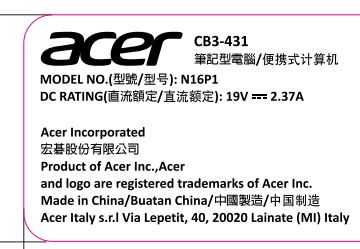 The notebook is said to have 2GB of RAM, 32GB of storage, Google’s Chrome OS software, and Intel’s entry-level Braswell processor.

It’s also described as having an “HD” display, which probably means 1366 x 768 pixels, given the other entry-level specs for this laptop.

Acer was one of the first companies to launch laptops running Chrome OS, and the company’s current Chromebook lineup includes models with 11, 13, and 15 inch displays, Intel or NVIDIA processors, and prices ranging from $180 to $500.

It seems likely that this new model would be an entry-level laptop for folks that want a larger screen, but don’t necessarily need the fastest performance.