Want to play classic games on a handheld device? You can load up an emulator on your smartphone… but if you don’t want to have to fiddle with touchscreen buttons or connect a game controller with physical buttons there may be another option.

The Sinclair ZX Spectrum Vega+ is a handheld game console that comes pre-loaded with a thousand games designed to run on the classic Sinclair ZX game console. The games are all fully licensed, which means you don’t need to go to any shady parts of the internet to download ROMS.

There’s just one small catch: The Vega+ doesn’t actually exist yet. The developers of the project are raising funds through an Indiegogo crowdfunding campaign and hope to ship the first units in September. 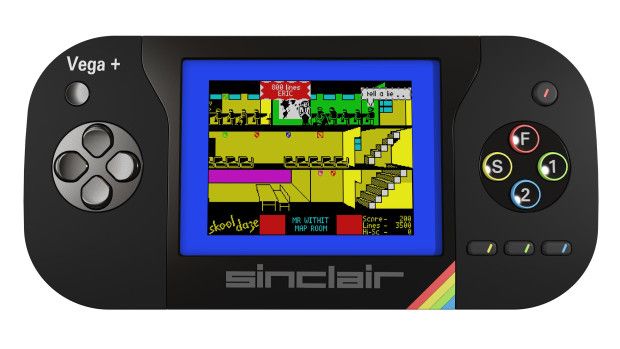 That said, the team behind this project looks pretty strong. The concept design for the Vega+ case comes from Rick Dickinson, the designer of the Sinclair ZX80, ZX81, ZX Spectrum, and QL devices and the project is being marketed by Retro Computers… a company which lists Sinclair Research as a shareholder (that’s a company founded by Sir Clive Sinclair… the guy who’s name is on the original Sinclair ZX systems).

The team says there’s already a working prototype, but the crowdfunding campaign will help bring the project to market.

While the handheld device has an LCD display and physical game control buttons, you can also run an A/V cable from the headphone jack to the composite port on a TV to play games on a big screen.

In addition to the thousand games that come pre-installed, the Vega+ should be able to support the thousands of other games designed for Spectrum consoles, but you’ll need to procure them on your own and then load them onto an SD card.