Shipments of wearable electronics including smartwatches and fitness trackers were up last year… by a lot. But the overall numbers are still pretty small when you consider just how many companies have been pushing wearables.

According research firm IDC, more than 78 million wearables were shipped in 2015, up from about 29 million in 2014. But it looks like the most popular devices were fitness trackers, not smartwatches. 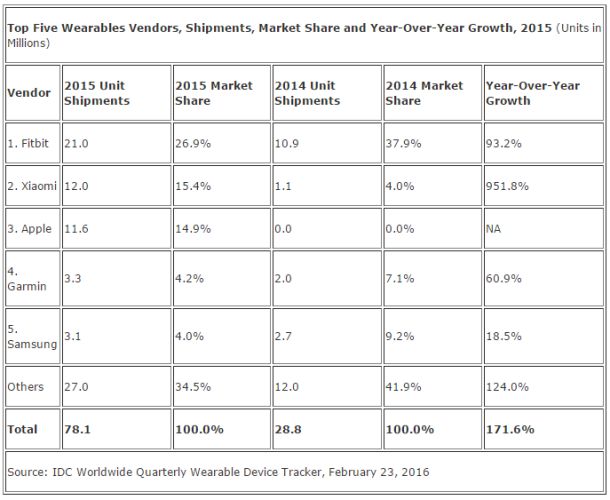 At the top of IDC’s top 5 list is Fitbit, with a nearly 27 percent market share. It’s followed by Xiaomi, with a 15 percent market share. And neither of those companies makes what you’d traditionally call a smartwatch. Instead they focus on products that count your steps, estimate calories burned, and measure sleep quality.

Those fitness trackers are also cheaper than most smartwatches. Xiaomi’s Mi Band, for instance, sells for a little as $15.

As for smartwatches which can pair with your phone, display notifications, and run third-party apps, IDC’s numbers put Apple in the lead, with over 11 million Apple Watch units shipped for a 15 percent market share.

It’s worth noting that the Apple Watch was only available for a little over half of 2015… and if you look at IDC’s numbers for just the fourth quarter, the Apple Watch was actually in second place (ahead of Xiaomi and behind Fitbit), not third place.

What can we learn from these numbers? Eh, probably not too much. The wearable electronics category is still pretty new, so 170% year-over-year growth doesn’t really tell us much about what will happen next year.

It is interesting that other companies producing smartwatches including Motorola, LG, Sony, and Pebble seem to have shipped fewer than 3 million devices during the year. That might not be a huge problem for a startup like Pebble that’s focused primarily on smart wearables. But it does make me wonder if some of those other companies might eventually decide that there’s not enough profit in this market to bother continuing.

Or maybe 2016 will be another year with massive growth in this space and there’s room for everyone to be a winner.