Remix OS is a customized version of Android that looks and feels like a desktop operating system. First launched by Jide in 2015, the operating system only supported a few devices at first.

In January Jide made it easier for anyone to try out Remix OS by releasing an alpha version of Remix OS for PC, allowing you to load the operating system onto a USB flash drive so that you could try it on many recent PCs.

Now Jide has announced that Remix OS for PC beta is coming on March 1st, and it’ll include several key features that users have been asking for. 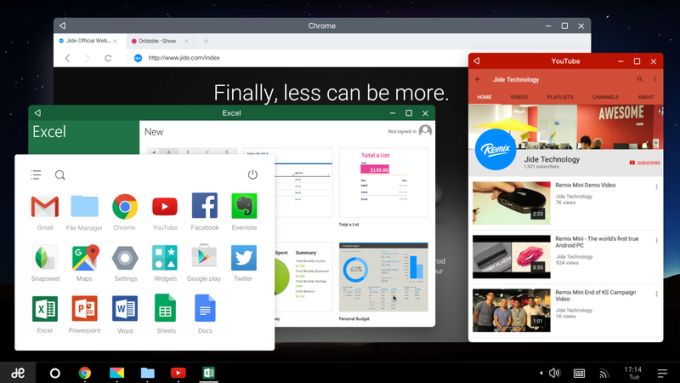 Over the Air Updates

If you have a tablet or desktop PC that came with Remix OS pre-installed, you can download and install updates to upgrade your PC with no problems.

But if you’ve been running Remix OS for PC alpha, then officially the only way to upgrade from one version to the next has been to re-install the entire operating system, overwriting any existing apps, settings, or other data you may have.

Some folks have found ways around this, but soon you won’t need to sidestep anything. Remix OS for PC beta will include support for over-the-air updates, allowing Jide to release updates that you can download over the internet and install without losing data, much the way you can on a Windows computer or Android phone.

The first versions of Remix OS were designed to run from a USB flash drive. This lets you boot your computer from the flash drive without writing anything to your PC’s hard drive or solid state drive… which is handy if you don’t want to risk losing any data.

But most USB flash drives aren’t as fast as built-in storage devices, and they’re not as convenient either. So users have been finding ways to load Remix OS onto their primary storage devices, despite the fact that Jide didn’t offer official support.

Now Jide will support that.

The company will be providing a tool for installing Remix OS on your device so that you can dual-boot Remix and another operating system, much as you would dual boot Windows and Ubuntu or another Linux distribution.

Part of the appeal of an Android-based operating system is that it has lower system requirements than Windows, OS X, or many other modern desktop operating systems. So you may be able to breathe new life into older computers by installing Remix OS… or at least that’s true in theory.

In practice, the first builds of Remix OS for PC only supported computers with 64-bit processors. That means if you had an older notebook with a 32-bit chip (such as a first or second-generation netbook), you were out of luck.

Earlier this month Jide released an initial build of Remix OS with 32-bit support, and the company is continuing to support both 32-bit and 64-bit processors with the March 1st launch of Remix OS for PC beta.

While Jide co-founder David Ko tells me that the company would like to include the Play Store with Remix OS for PC, Jide is still in talks with Google about the Play Store and other Google Services. 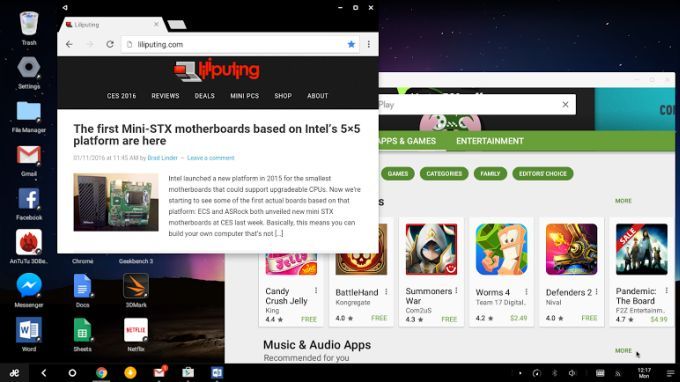 Normally a company that wants to ship a phone, tablet, or TV with Google Mobile Services has to get certification from Google after demonstrating that the device meets Google’s requirements. That’s harder to do when releasing an operating system designed to run on thousands of different computer configurations.

But Ko says he’s pretty confident that Jide is doing everything possible to make sure that most Android apps that follow Google’s guidelines should run properly on PCs running Remix OS. Now the company just needs to convince Google to approve Play Store support.

Until then, you can always sideload the Play Store and other Google apps.

At this point Remix OS is still aimed at early adopters willing to help kick the tires. But eventually Ko hopes it will be an operating system for “the next billion” internet users… the folks in developing nations who are most likely to use a smartphone before they touch a PC.

Remix OS provides access to the same apps they’re used to using… but in a productivity-focused environment with a taskbar, window system for viewing multiple apps at once, and support for keyboard and mouse input.

If Jide is successful, Remix OS could one day challenge Windows as a desktop operating system. And while the company is primarily focusing on tablet, notebook, and desktop-case devices, Ko says a Remix OS smartphone isn’t out of the question.

Maybe you’ll eventually be able to run full-screen Android apps on a smartphone and then plug your phone into an external display to run them in desktop mode… much the way you can with Windows 10 Mobile phones that support Microsoft’s Continuum for phone feature.

Want to learn more about Jide’s vision for Remix OS? Check out episode 3 of the LPX Show podcast, featuring an interview with Jide co-founder David Ko.