Panasonic’s Toughpad line of rugged devices is mostly made up of tablets. But a few years ago the company started launching phone-sized handhelds..

Now Panasonic is launching the Toughpad FZ-F1 with Windows 10 software and the Toughpad FZ-N1 with Android 5.1 Lollipop. Both are basically rugged smartphones with 4.7 inch displays, 4G LTE voice and data support, features designed to make these rugged devices useful in stressful conditions.

But Panasonic’s press release is careful to call these devices “handhelds,” rather than phones… possibly to make it clear that these aren’t really aimed at typical smartphone shopper. 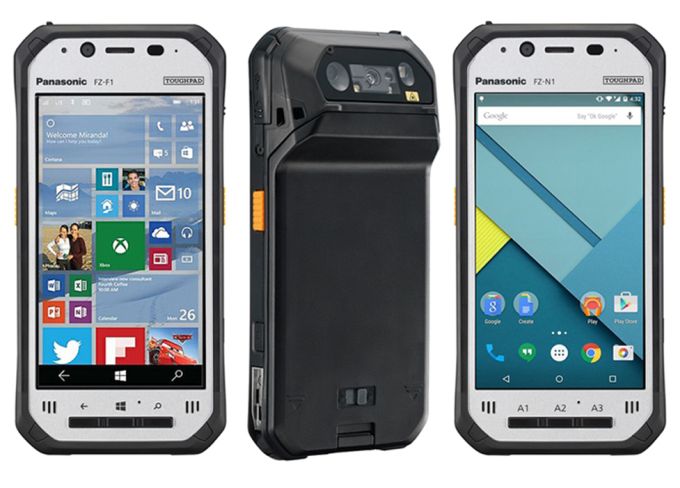 They supports 802.11ac WiFi, Bluetooth 4.1, NFC, and GPS and Panasonic says you should get up to 8 hours of battery life from using a standar 3,200 mAh battery for continuous use, 24 hours of talk time, or 700 hours of standby time from a regular battery. There’s also a 6,400 mAh “long life” battery option that doubles those times. And the batteries are field replaceable.

Panasonic’s handhelds meet IP65 and IP67 water and dust resistance ratings which means you can drop one in about 3.3 feet of water for a half hour without causing any damage. They’ve been tested to ensure they can survive a 6 foot drop, and another test involved 2,000 consecutive drops of 3.3 feet.

The devices also have sunlight viewable displays, support for using the touchscreen even if you’re wearing gloves, and stereo front-facing speakers that can provide up to 100 decibels of sound. The idea is to make these devices usable even in a noisy, dirty industrial site.

There’s also a rain sensing mode that should make it easier to use a Toughpad FZ-F1 or FZ-N1 when they’re being splashed with water, and there’s a barcode reader with activation buttons on the side of the phone.

All of those features don’t come cheap: the Android model is expectd to sell for $1,499 when it goes on sale in March, while the Windows 10 IoT Mobile Enterprise model will sell for $1,599. At least hte price includes a 3-year limited warranty.

The devices are also a bit thicker and heavier than a typical smartphone, weighing about 9.8 ounces and measuring 0.64 inches thick.