As expected, GPD has launched a crowdfunding campaign for a new handheld gaming device. But unlike most of the company’s products to date, this new handheld isn’t an Android tablet. It’s a tiny Windows PC.

The GPD Win is basically a laptop with a 5.5 inch display, an Intel Atom Cherry Trail processor, dedicated gaming buttons and direction pads, and athumb keyboard.

GPD says the full retail price will be $499, but if you back the company’s Indiegogo campaign you can reserve one for $299. It won’t ship until October though. 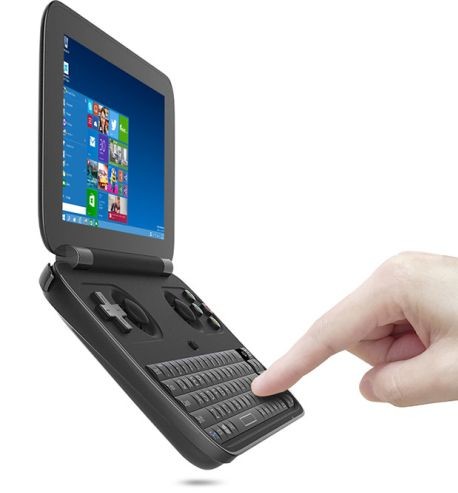 On paper, the GPD Win certainly looks like an intriguing option for Windows gaming on the go. With an Atom x5-Z8500 processor, a 1280 x 720 pixel touchscreen display, 4GB of LPDDR3 1600 RAM, 64GB of eMMC storage, and support for up to 128GB of microSD card storage, it should be able to handle some older PC games as well as some Windows Store games made for modern systems.

But you could also probably use the little computer to stream games from a PC using Steam in-home game streaming or similar technologies. GPD also suggests the computer could be used with emulators to play classic console games.

It has a D-Pad, two analog stick-style controllers, A, B, X, and Y buttons, a full QWERTY keyboard (that’s probably too tiny for touch typing, and a good range of input and output options including a mini HDMI port, a full-sized USB 3.0 port, and headset jack.

There are four shoulder buttons on the back of the case, as well as dedicated volume, start, select, L3, and R3 buttons next to the keyboard.

You can also slide a switch above the keyboard to enable mouse mode, allowing you to use one of the analog sticks to move a cursor.

GPD says the non-removeable 6,000 mAh battery should be able to provide up to 8 hours of battery life while streaming videos, or around 6 to 8 hours of game play time (depending on the games).

Other hardware specs include 802.11b/g/n WiFi and Bluetooth 4.0, stereo speakers, and a Corning Gorilla Glass 3 screen. It ships with Windows 10 Home software.

The GPD Win measures 6.1″ x 3.8″ x 0.8″ and weighs about 10.6 ounces. In other words, it’s a laptop-style PC with a clamshell design and support for Windows 10 software. But it’s not much bigger than a smartphone.