Last year Google launched a tiny device called the Chromecast Audio that you can plug into any speaker to stream music from your phone or the internet to that speaker.

This year Uyesee has introduced a similar device called the AudioCast M5. Like the Chromecast Audio it plugs into any speaker, pairs with an Android or iOS device, and supports multi-room audio, allowing you to stream the same content to multiple speakers throughout your home.

While the Chromecast Audio costs $35, the AudioCast M5 sells for between $37 and $40… but Uyesee says it has some features Google’s media player does not. The company sent me two units to test, and while it basically does what it’s supposed to, I found it a little more complicated to set up and use than the Chromecast Audio.

The AudioCast M5 is a small, simple gadget. The top looks sort of like a tiny record, but the device is only about 2.2 inches across. At about .67 inches high, a little thicker than a 0.53 inch ChromeCast Audio, but it’s still small enough to slide into just about any pocket.

There are two ports: one for a 3.5mm audio cable and another for a micro USB cable which serves as a power cable. While the AudioCast M5 comes with a small 3.5mm audio cord, you can also use and adapter if you have speakers that require RCA or 1/8th inch input.

One more thing you’ll find on the side of the AudioCast M5 is a WPS button. Fire up the AudioCast app on your Android or iOS device, select the option for adding a device, and tap the WPS button when you’re ready to pair the hardware with your phone or tablet.

Note that the AudioCast M5 only supports 802.11n 2.4 GHz networks. So you’ll need to make sure your Android or iOS device is connected to an appropriate network before you can use the M5. I normally connect to a 5 GHz 802.11ac network in my home, and had to switch in order to use the AudioCast. 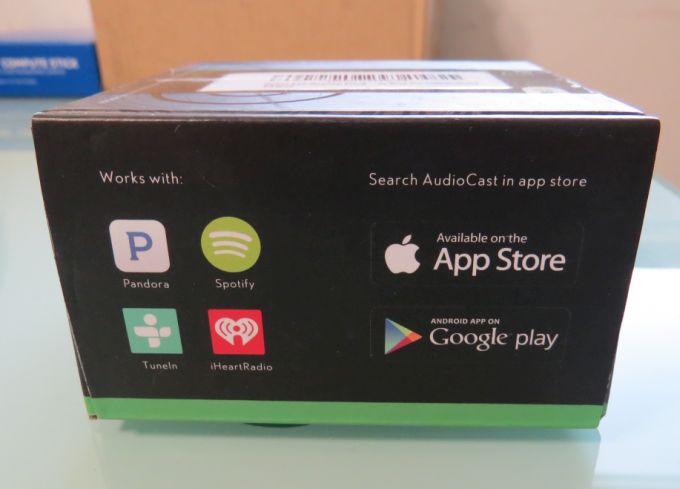 On the side of the AudioCast box, you’ll see pictures suggesting it works with Pandora, Spotify, TuneIn, and iHeartRadio. And it kind of does… but you may need a premium account to use some of those services, such as Spotify. TuneIn Radio worked just fine though.

Part of what makes Chromecast Audio so easy to use is that you only really need to use the official Chromecast app to set up your device. After that, you can just open the apps you would normally use to listen to music, podcasts, or other audio sources and tap the Cast icon to stream music to your speakers. 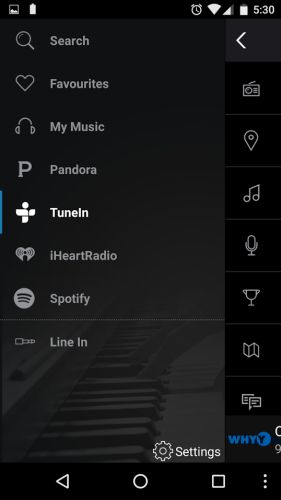 The AudioCast M5 requires you to open the AudioCast on your device every time you want to stream music to a speaker. From there, you can choose from the list of supporter services or select “My Music” to stream content directly from your phone or tablet.

This could change in the future: the makers of the AudioCast M5 say support for Google Cast for Audio, Google Play Music, and Tidal is coming soon. But right now you still need to use the AudioCast app for everything.

The media player isn’t particularly attractive or customizable, but it is serviceable. And Uyesee says one of the key differences between its device and Google’s is that the AudioCast supports Airplay streaming from iOS or OS X devices, as well as network-attached storage or UPnP devices (although there may be third-party apps that will let you do some of these things with a Chromecast).

Probably the most compelling feature of the AudioCast platform is multi-room audio, which is why I had Uyesee send me two units to test. 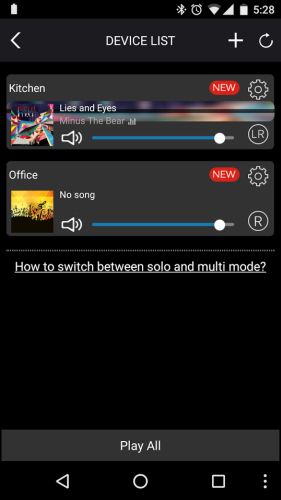 When you first connect your phone to two speakers, they’ll show up as independent devices in the mobile app. You can then control them independently — playing different songs, adjusting the volume, or playing and pausing content on each speaker.

But you can also long-press on one speaker in the mobile app to select it, then drag-and-drop it onto the other speaker in your list to synchronize them. Now when you select a song or audio source, it will play on both speakers at the same time. 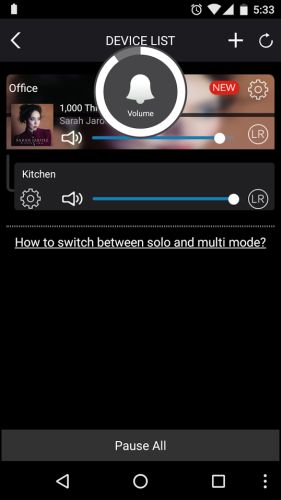 You can still adjust the volume of each speaker independently, but the music should be synchronized, allowing you to play the same content in your kitchen and living room for instance, or inside your house and on a speaker out on your patio.

When speakers are synchronized, you can also choose whether to play left-channel, right-channel, or stereo audio on each speaker. So if you’ve got two different speakers in the same room, you could create a stereo setup by designating one as the left and the other as the right.

Put it all together and you’ve got an interesting value proposition… but it would be a lot easier to recommend the AudioCast M5 if we lived in a world where the Chromecast Audio didn’t exist. 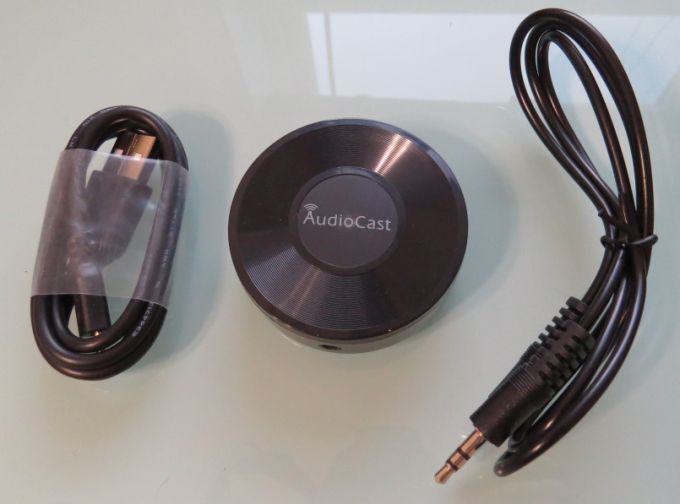 As I mentioned in my Chromecast Audio review, I typically only need to play audio on one speaker at a time, so a Bluetooth speaker is all I really need. But I can see how devices like this could be useful for some people… it’s a much cheaper way to get multi-room, wireless audio than a Sonos or other premium speaker system.

But from time to time while I was testing the AudioCast M5, one of the speakers would suddenly disconnect from my phone unexpectedly, requiring me to re-add the device, which can take anywhere from a few seconds to a few minutes.

The selection of supported third-party audio streaming services for the AudioCast M5 is pretty small. And despite a comparison chart from Uyesee which tries to paint the company’s media streamer as superior to the competition, I just didn’t find it to be as reliable or effective as Google’s model, which sells for a few dollars less.