Intel launched a new platform in 2015 for the smallest motherboards that could support upgradeable CPUs. Now we’re starting to see some of the first actual boards based on that platform: ECS and ASRock both unveiled new mini STX motherboards at CES last week. 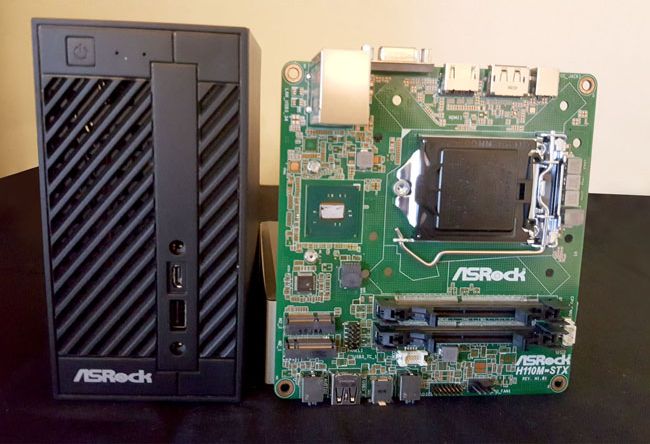 Basically, this means you can build your own computer that’s not much bigger than an Intel NUC mini PC, while choosing your own processor and other components. And if you decide to upgrade the CPU later on, you’ll be able to do that since it isn’t soldered to the system board.

Both the ECS and ASRock models to be based on the Intel standard that we previously knew as 5×5, which means they should both measure about 5.5″ x 5.8″ inches and feature an LGA 1151 CPU socket with support for most 6th-gen Intel Core “Skylake” chips with a TDP of 65 watts or less.

That means you should be able to opt for a Celeron, Pentium, Core i3, Core i5, or Core i7 processor.

The ECS model has similar specs, including two DDR4 memory slots, M.2 slots for storage and a wireless card, and Ethernet. But this model has two USB 3.0 ports, one USB 3.1 Type-C port, and DisplayPort and HDMI ports for video output.

Looking for a case for your shiny new mini-STX computer? Those are also starting to appear. ASRock is showing off a 1.92 liter case for its motherboard, while case maker Silverstone is also demonstrating an early design for its own mini-STX case.