A handful of companies have tried to put a second screen on a smartphone by slapping an E Ink display on the back. But Microsoft Research has another idea: add a secondary screen through an optional flip cover.

According to WMPowerUser, Microsoft’s research division is developing the technology, and the team is in talks with the company’s Lumia team which means that future Microsoft phones might support this kind of second-screen flip cover. 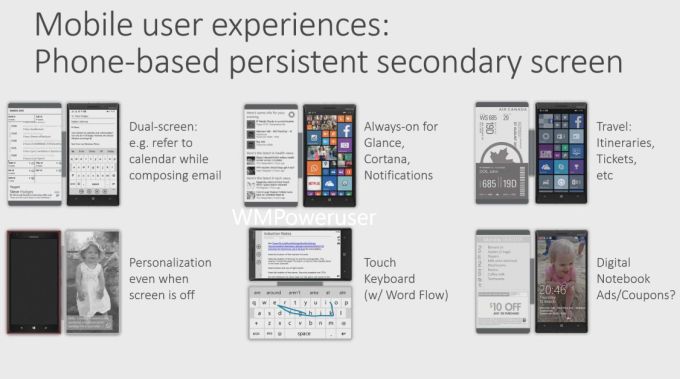 There are a lot of things that would be easier to do on a smartphone if it had two displays that you could see at the same time:

Since the secondary screen is designed to use E Ink, it should also be easy to view outdoors and it should only consume power when content on the screen is being refreshed.

That means you’d be able to put a photo or other pattern on the screen and leave it up as decoration for your phone when it’s covered and not in use. Or you could pull up a boarding pass, ticket, map, or other content and view it at a glance without turning on your smartphone’s primary screen.

There’s no guarantee this idea will ever see the light of day. But if it does, it could change the way people user their smartphones.

While it’s likely that Microsoft would initially work on this project for Windows phones, the company has been making a habit of releasing software for Android and iOS in recent years… maybe a second-screen flip cover for iPhones or Android phones isn’t out of the question?