Last year Saygus showed up at the Consumer Electronics Show with an Android phone prototype featuring some pretty impressive specs, including 3GB of RAM, 64GB of storage, high-quality front and rear cameras, and dual micro SDXC card slots, for up to 400GB of removable storage. 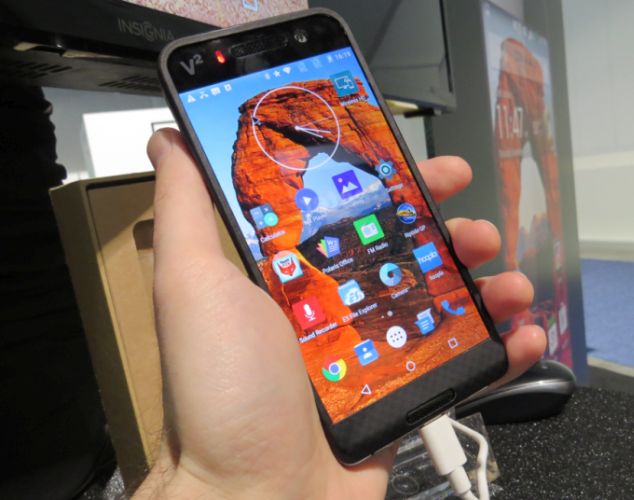 Saygus had originally hoped to ship the phone in May, 2015. But the company ran into problems with its manufacturing partners. Then the company launched a crowdfunding campaign in June… and took around 5,000 pre-orders from folks willing to pay $599 for the phone.

Backers of that campaign should be among the first to get a phone when Saygus ships the V² later in the first quarter of 2016. The company will also start selling additional phones for around $600 to $650.

Saygus ultimately decided not to outsource the engineering of its phone, and hired its own people in China to get things done. The design is just about finalized and mass production should begin soon, although Saygus isn’t ready to give an exact date.

The spec sheet might not look quite as impressive a year later. The phone has an aging (but still pretty good) Qualcomm Snapdragon 801 processor. Saygus considered changing to a newer chip, but decided the Snapdragon 805 didn’t offer enough of a performance improvement and the newer Snapdragon 808 and 810 chips have too many issues.

If you were hoping the company would make the switch to the upcoming Snapdragon 820… well, Saygus does plan to use that chip. But it will be in a future phone that’s tentatively scheduled to launch around the 2016 holiday season.

While the Saygus V² has a processor that’s a few years old at this point, other specs look pretty good. The phone has a 5 inch, 1920 x 1080 pixel display and a few features that are increasingly hard to find on premium Android handsets though. Remove the kevlar cover on the back of the phone and you can replace the 3,100 mAh battery. You can also access the two microSD card slots and two SIM card slots that way.

Other features include a USB Type C port, Qualcomm Quick Charge 2. supports, 802.11ac WiFi, Bluetooth 4.0, NFC, and GPS. There’s a fingerprint scanner, three microphones for noise cancellation, and an IR transmitter that lets you use the phone like a remote control for your TV or other home theater gear. The 21MP rear camera and 13MP front camera both have optical image stabilization and auto focus.

And since the phone is shipping later than expected, it will come with Android 6.0 rather than Android 4.4 or Android 5.0 as previously planned.