The LG Gram line of laptops are notebooks that weigh about a kilogram, which is roughly 2.2 pounds. The company has been offering models with 13.3 inch and 14 inch displays for a little while, and now LG is showing off a 2.2 pound laptop with a 15.6 inch display.

Normally I don’t pay a lot of attention to laptops with big screens. But normally they aren’t this easy to tote around.

Not only does the LG Gram 15 weigh less than a kilogram, but it also measures just about 0.7 inches thick. Like any good ultrabook, it’s the sort of laptop you could throw in a bag and almost forget that you have with you. But it could appeal to folks who think that traditional ultrabooks are tough to use because their screens are too small. 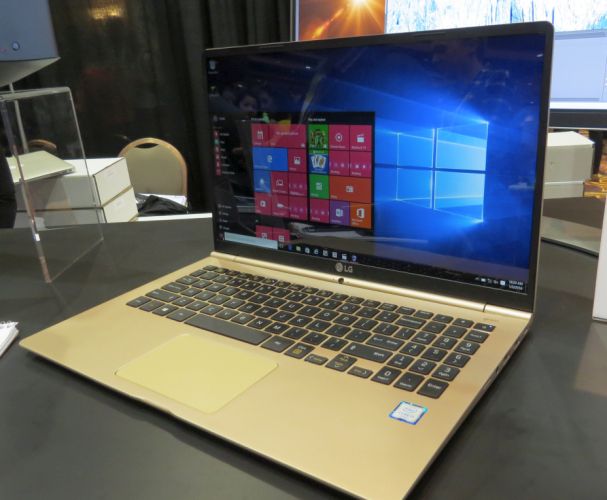 I like compact notebooks, and I like high-resolution displays. But because many third-party Windows apps don’t play well with screens that have a high pixel density, I often find myself squinting at 13.3 inch notebooks with 1920 x 1080 pixel or higher-resolution displays.

LG also made use of the extra space on the chassis to put a numeric keypad on the right side of the keyboard. That’s something you won’t typically find on a smaller ultrabook.

LG says the notebook will be available in the first half of 2016, will be available with a Core i5 or Core i7 processor, features HDMI and USB 3.0 ports including a USB Type-C port, and there will be models with 8GB of RAM and 256GB or 512GB of storage.

While the light weight certainly helps make the LG Gram 15 feel smaller than a typical 15.6 inch notebook, so does the design: the bezels around the screen are pretty thin, making the laptop feel just a bit larger than a normal 14 inch model.

Unfortunately, LG took a page out of Dell’s XPS 13 playbook when reducing the screen bezels, and placed the webcam on the bottom of the screen instead of the top. That means your hands might get in the way if you find yourself typing during a video conference.

Still, the LG Gram 15 is one of the most exciting things I’ve seen so far on the first day of CES week. It’s hard to convey just how light this laptop feels when you hold it in your hands. Sure, there are laptops that weigh even less, but they don’t have screens this big, so it’s not quite as surprising when you pick them up.

LG hasn’t revealed pricing details for the Gram 15 yet, nor has the company revealed battery life estimates. But both are expected to be similar to those for the LG Gram 13 and 14, which currently sell for around $900 and up, and which offer about 7.5 hours of battery life.