The Samsung Galaxy TabPro S is a 12 inch Windows tablet with a 2160 x 1440 pixel AMOLED display, an Intel Core M Skylake processor, and support for a Bluetooth digital pen.

Samsung is showing off the tablet and a companion keyboard cover at CES 2016, but the company hasn’t announced a price yet. The tablet should be ship in the first quarter of the year. 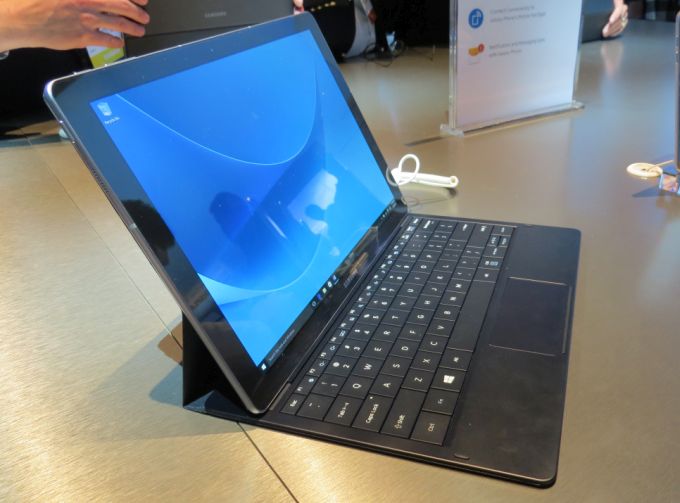 The tablet features 4GB of RAM, and Samsung will offer models with 128GB or 256GB of storage. Other features include 802.11ac WiFi, Bluetooth 4.1, NFC, a 5,200 mAh battery, quick charging support, and 5MP cameras on the front and rear.

It has a single USB Type-C port, but Samsung offers a multi-port adapter that give syou HDMI and full-sized USB ports.

Samsung’s new tablet features a slim profile thanks in part to its low-power processor and fanless design. It measures about 0.25 inches thick and weighs 1.5 pounds.

The keyboard is also pretty slim, but it has full-sized keys with enough travel to make typing reasonably comfortable.

You can use the case as a stand for the tablet, and Samsung says it’s adjustable, allowing you to prop up the tablet at two different angles, but honestly only one of those angles seems very useful. You basically have a choice of standing the tablet at a roughly 120 degree angle from the keyboard, or a much steeper angle that seems like 150 degrees or so (those are guesstimates: I didn’t actually measure the angle). At that second angle, the screen is only really visible if you’re standing over the tablet, not if you’re sitting in front of it. 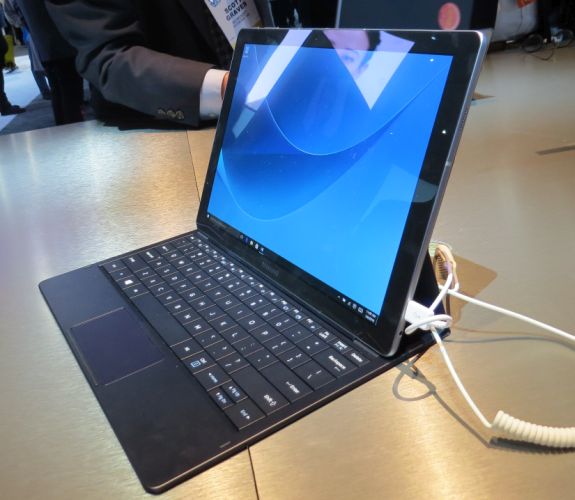 While a truly adjustable keyboard would be nice, overall the Samsung Galaxy TabPro S seems like it offers a good mix of specs and design. It has more RAM and memory than most entry-level Windows tablets. But it’s unlikely that Samsung will give this tablet an entry-level price. With a Core M processor, a svelte design, and the word “Pro” in its name, it seems like the company plans to position the Galaxy TabPro S as a premium device.