The Lenovo ThinkPad X1 Yoga is a notebook that becomes a tablet when you tilt the 14 inch touchscreen display back 360 degrees. It weighs 2.8 pounds, measures two thirds of an inch thick, features support for up to an Intel Core i7 Skylake processor, and supports up to 16GB of RAM.

But the most eye-catching feature of this laptop may be the screen… at least on some models. 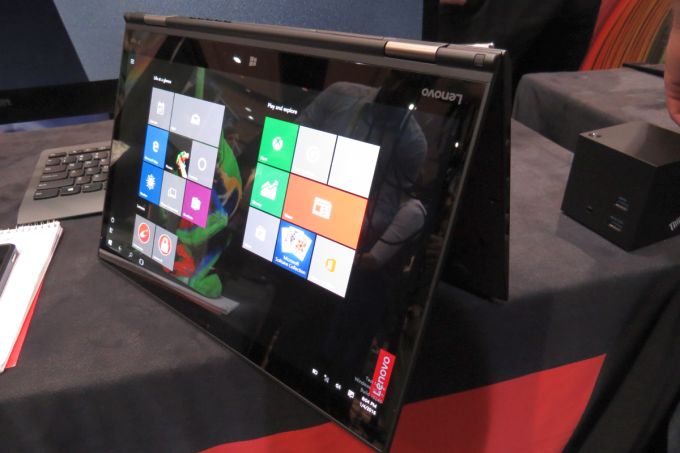 The ThinkPad Yoga will be available with three display options, including a 2560 x 1440 pixel OLED display with vibrant colors that look better in person than they do in the photos I managed to take under harsh lighting.

Lenovo says this is one of the first convertible Windows notebooks to be available with an OLED display, although it won’t actually be available for at least a few months, and the OLED screen will add about $200 to the base price of the laptop.

Another feature that helps set this convertible apart from many other 360-degree laptops is that not only does the ThinkPad Yoga support digital pen input, it actually comes with an active stylus. It also has a slot in the case where you can store the pen when it’s not in use.

That’s something that used to be common for tablets that came with pens, but this day it’s so rare that when I asked a Lenovo representative whether I could borrow the pen to test, I was surprised when he pulled it out of the side of the notebook.

The notebook has three USB 3.0 ports, HDMI and microSD card slots, support for optional wired and wireless docking stations, and the ThinkPad Yoga has Lenovo’s ThinkPad keyboard with a TrackPoint pointing stick in the center. There’s support for biometric authentication with a fingerprint sensor.