It might be a while before you can include a dumpling emoji in a text message. But later this year you might be able to add a croissant, avocado, owl, or sneezing face with the tap of a button.

Unicode 9.0 will be released in June, 2016 and the Unicode Consortium has just unveiled 74 characters that are being considered for inclusion. 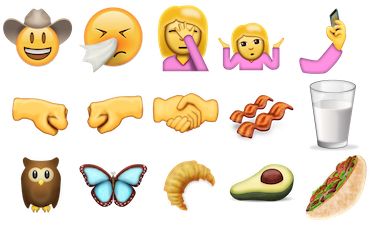 It’s possible that not all of the new characters will make the cut, but if they do we could finally be able to use a single character to represent a face palm, shrug, left-facing fist, right-facing fist, cucumber, bacon, face with cowboy hat, or man in tuxedo, just to name a few of the new options.

There’s nothing quite as racy as the middle finger that was added to Unicode 7.0 a while back.

But it turns out that selecting universal characters to represent items such as milk or beans can be pretty tough: As Jennifer 8. Lee discovered when she started looking into the Unicode Consortium (to find out why there’s no dumpling emoji and how to rectify that situation), the organization spends a lot of time trying to figure out if a milk carton would be understood universally or not (the group ultimately decided to just use a glass of milk.

In fact, there’s currently no emoji for “bean” because people in different parts of the world have a different image of what a bean is. Should the universal character be a picture of a kidney bean? How about a soy bean? Maybe a pinto bean?

The thought behind dumpling, by the way, is that there are versions of the foods in many countries, and a single Unicode character could represent gyoza, ravioli, empanadas, and pierogi.