Microsoft appears to be getting ready to launch a service that will let Windows 10 computer users connect to 3G and 4G LTE cellular data networks using a Microsoft SIM card. There are no contracts involved: you’ll just pay for the data you need when you need it, and Microsoft will let you pay with the same info linked to you Windows Store account.

You’ll need a PC with a 4G modem and a Microsoft SIM card to use the data. But there’s already a Microsoft “Cellular Data” app available for download from the Windows Store, which is how we know about the upcoming plan to launch SIM cards and service. 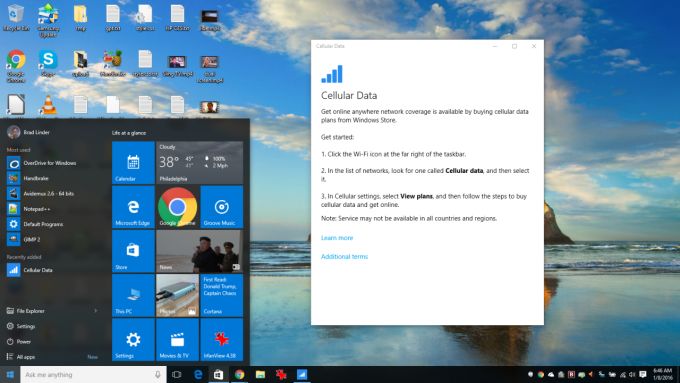 The app was spotted by The Verge, which speculates that Microsoft could be planning to launch a Mobile Virtual network by partnering with existing wireless carriers to provide service, much the way Google does for its Project Fi service.

According to a FAQ included in the app itself, service will initially be available in the US, UK, and France. There’s no support for roaming.

When you buy a plan, you’ll be able to use data right away. The plan ends as soon as you either hit the cap for the amount of data you’ve paid for or when a set period of time expires. There’s no option to add data to an existing plan. Instead, when you use up your data, you can just buy some more.

Overall it seems like an interesting option for getting online when you’re away from a WiFi hotspot… especially for users who only need to do this occasionally. It’s the sort of thing that would certainly come in handy for business travelers, for example.

Or say, hypothetically, that you’re a reporter spending a week in Las Vegas covering the Consumer Electronics Show… the option to buy some data exactly when you need it would sure sound nice, right?

There’s still a lot we don’t know though. Microsoft hasn’t officially announced anything yet, so there’s no word on when the program will launch, how much data will cost, or how to get a Microsoft SIM card.