It’s CES time again, and as a writer who focuses on mobile tech news, it’s time to put that tech to the test. This week I’ll be reporting from a dozen different locations around Las Vegas as I cover the latest announcements.

Right now things are relatively calm as I sit in my hotel room, so I figured I’d take a minute to show you the tools I’ll be using. They’re not that different from the ones I brought with me last year. 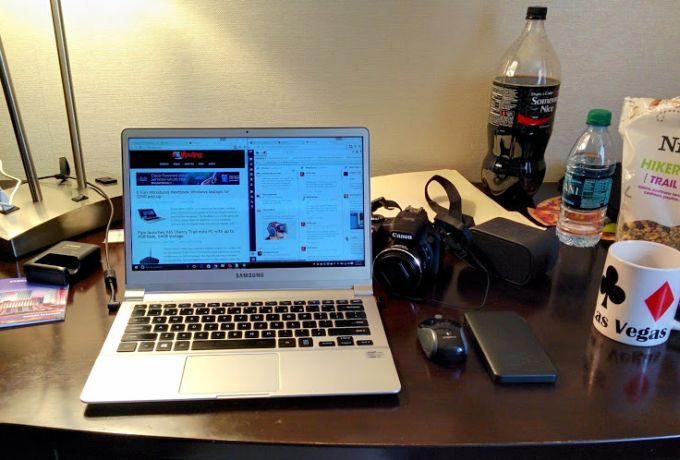 There were a lot of moments between the Black Friday and Christmas sales when I almost pulled the trigger and bought a new ultrabook. A faster processor, better battery life, more RAM, and other upgrades are all calling my name.

But the truth is that this little workhorse I picked up in 2012 is still a pretty great mobile reporting companion. It weighs just 2.4 pounds, has a 13.3 inch, 1600 x 900 pixel display, and the Core i5 Sandy Bridge processor is fast enough for most tasks.

I also packed a Logitech travel wireless mouse for use with the laptop.

Unfortunately the non-removable battery continues to degrade and I can only get a few hours of run time, which is why I also brought…

Plug this enormous battery pack into my laptop and I can more than double its run time. I can also charge both the laptop and the battery simultaneously, so I don’t need to lug around two chargers when I’m on the go.

Sadly the battery weighs more than a pound, which sort of makes the whole setup a little less portable.

For the past few years I’d been using the Canon PowerShot SX130, which is a point-and-shoot with a 12X optical zoom, a wide-angle lens, and a decent image sensor… but which is a lot simpler to use than a DSLR.

Unfortunately I dropped it and broke the battery door in 2015. It seemed simpler to replace the camera than to repair it, but I was underwhelmed by the newer models in that series.

Then I noticed that Canon was offering a great deal on refurbished SX50HS models, and I switched to this 12.1MP camera with a 50X zoom. The zoom is probably overkill (although we’ll see if it comes in handy during any press conferences this week), but the image quality is pretty good and this camera can shoot video in 1080p, unlike my old camera. It also doesn’t automatically stop recording videos when I hit the 10 minute mark, so if you’ve noticed some more long-winded video reviews in my YouTube channel lately, that’s why.

I really liked the camera and fingerprint sensor on the 2015 Nexus 5X I reviewed. But performance-wise, I didn’t find much difference between that new phone and my 2013 Nexus 5. I also prefer the size of the older model.

So instead of upgrading phones in 2015, I bought a 6,000 mAh portable battery pack. It’s changed the way I use my phone. Now I don’t have to worry about my battery dying after a few hours of heavy use, since I can recharge my phone a few times before the backup battery runs out of juice.

I would like a phone with a better camera. But I can wait a little while to find the perfect fit.

The phone is my calendar, navigator, and communication device on the go. It can also serve as a backup camera if anything happens to my primary camera, but as the picture at the top of this post demonstrates, it doesn’t take great low-light photos. And when I’m between WiFi hotspots, I can also use it as a cellular modem.

Speaking of cellular modems, I’ve got a FreedomPop MiFi 500 LTE hotspot with me, but I don’t really expect to use it this week unless there’s an emergency.

I’ve also brought a Logitech UE Mini Boom Bluetooth speaker to keep me company with music while I work from my hotel room, a 2011-era Amazon Kindle Touch and B&N NOOK HD+ (running CyanogenMod) to keep me company with books and videos on the airplane trips to and from Las Vegas), and a portable humidifier for my hotel room, because I’m tired of waking up with bloody noses due to the dry air in this city.

For the past few years, I’ve managed to save a few bucks on coffee by picking up some Keurig K-Cups at the nearby Walgreens and using them in the machines in my hotel room… but this year my room not only doesn’t have a Keurig machine, it seems to have a broken coffee machine.

Rather than complain, I just went out and bought a 2-liter bottle of Coke and I’m using the ice machine in the hall to keep my caffeine delivery system cool, since there’s no mini-fridge in my hotel room. Add some trail mix and a 12-pack of Cliff Bars I picked up before traveling, and I’ve got myself cheap breakfast every day.