If you didn’t get in on the beta testing of Microsoft’s virtual personal assistant, today you can download the app without signing up as a tester.

Microsoft has launched Cortana on Google Play and the App Store, as well as through Microsoft’s Windows 10 companion app.

If you did sign up for the beta test, the final version won’t be anything new for you as the official launch uses the latest build from the beta test, which includes the ability to track reminders and notification across platforms and ask Cortana questions. 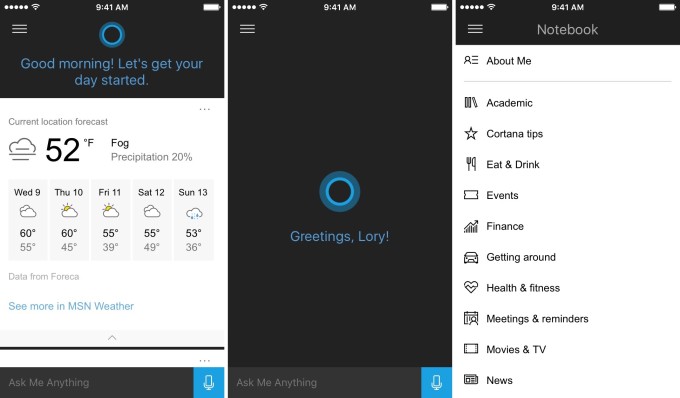 Android users will be able to use the “Hey Cortana” feature while in the app or on the home screen. Additionally, you’ll be able to get text notifications delivered to your PC via “task continuation,” so you won’t have to track down your smartphone to see who sent you a message. You can also call a contact, send a text message, and other personal assistant type actions using Cortana.

On iOS, the effect is much more limited, due to Apple’s developer restrictions. From a preliminary testing, Cortana on iOS is practically useless. It took longer to use the personal assistant to send a text message than it would have to simply send one directly.

Of course, Cortana works the best on Windows-based devices, since it has deep integration with many of the device’s features for a more robust version.

Hopefully, Microsoft will continue to work on ways to make Cortana integrate better with non-Windows devices, otherwise the experiment in cross-platform compatibility will be wasted energy.